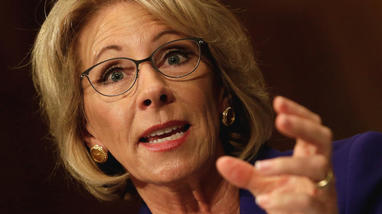 Betsy Devos, the U.S. Education Secretary (Courtesy: grandforksherald.com)
The Democratic Party senators and two Republican Party senators, were unwilling to confirm Betsy DeVos as President Donald Trump's pick for education secretary.
Therefore, the administration was stuck on two fronts early on Tuesday: First is over the court's bar on temporary travel ban and getting things in motion for the confirmation of some nominees for various ministries.
​     But on Tuesday, the deadlock of 50-50 over the confirmation hearing for DeVos, which would have prevented her from getting confirmation, was resolved by Vice President Mike Pence's vote, and that gave her a sail through the Democratic Party's wall, with 51-50 votes.
As at Tuesday morning before the votes, there were no cracks in the wall of opposition against her selection to lead the education ministry. Observers felt that DeVos might not sail through the opposition wall, which would not have arisen, had the two Republican Party senators not joined the opposition line.
With experience in legislative matters, Pence knew this was a time that called for prudence to get things in motion, instead of getting stuck. Already, the administration has got stuck over the temporary travel ban on migrants from seven Muslim countries. Although, still fighting in court to get a court bar of the travel ban lifted, it would have amounted to getting stuck everywhere with the education secretary pick's deadlock unresolved, and the opposition smiling.
News reports show that it is the first time in the nation's democratic history, when a vice president has used his vote in the senate to break a tie, which without would have ensured the opposition stand on the way of getting confirmation for the president's pick for office.
The deadlock needed to be broken and the vice president's experience placed him in the position about what to be done. With 50-50 votes, he raised his voice that his own vote as leader of the senate be counted for confirmation. Meanwhile, the Appeal Court is expected to begin hearing arguments over the lower court's bar on the temporary travel ban.
Pence's role is a reminder about his pick as a vice presidential candidate by Trump, his acceptance by the Republican Party's faithfuls, who were opposed to Trump and how his emergence as a vice presidential hopeful, rallied the Republican Party's base around Trump's candidacy.
Some people said at that time that Trump knew the 'Mathematics of Politics,' for not having picked a politician, whose standing would have wasted his campaign. Obviously after their election victory, Pence is still proving very relevant as the guy the president relies upon to keep things in motion.
Now, with DeVos' confirmation as education secretary a forgone conclusion, attention and efforts have turned to jeff Sessions' confirmation hearing, for the office of attorney general. News reports are showing the confirmation votes may come up on Wednesday. If he is confirmed, he will be the sixth to be confirmed among Trump's picks for secretaries.
NEWS AND FEATURES
News & Features Around The World