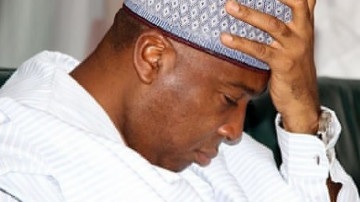 Nigeria's senate president, Bukola Saraki (Courtesy: Punch Newspapers)
Nigerians witnessed their senate president, Bukola Saraki, walked from the senate chamber into the dock at the Code of Conduct Tribunal in Abuja, where he was arraigned for offenses about wrong declaration of assets on Tuesday.
The entire country has been agog with news from the moment Saraki walked into the court room, to the moment he pleaded not guilty and the court granted him a bail in self- recognition.
Just as many Nigerians followed the proceedings in the court room through various websites that covered it, so also were seemingly faceless Saraki's adversaries, who want him down and out. And they would be glad that the first script of their assignment had been achieved.
But just like no one knows what would happen tomorrow, they don't yet know what turn the case would take. They are in the same shoes like their accused senate president. It is where humanity is more superior to humans, who lack knowledge of tomorrow.
Sophocles wrote in "Oedipus The King" that let no one joy and say he is an overcomer, until he has breathed the last. What Sophocles is saying is that anything is capable of happening in human life as long as one is alive to dim one's joy. Imagine how Saraki may have felt in the court room. He reportedly hesitated to walk into the dock. Who in his shoes would not?
Bola Tinubu also walked into the dock sometimes ago to answer a case. This is to demonstrate that the dock is made for human beings, when the necessity arises, irrespective of status. Walking into the dock to take a plea does not necessarily mean that the accused is guilty. Oedipus The King's case is different from the case of ordinary mortals in court a room, because he was faced with a matter beyond human comprehension.
Saraki's case is not beyond human comprehension, because it is not the first time humans would be betraying humans. Jesus Christ was sold out to die on the cross by his most trusted disciple - Judas Iscariot. They are called traitors, because they betrayed a common cause for another cause they believe in. The person sold out may go down forever, or may still resurrect like in the case of Jesus Christ.
So Saraki like every other accused persons who are presumed innocent until proven guilty, Saraki may still walk, unless he has to forfeit public office for 10 years if his accusers succeed in nailing him like Socrates' accusers did. But watch it, the type of Socrates is rare in this generation. Unlike in Socrates' case, Nigerians must be yearning to watch what will later become one of the most intense battle for political survival. The number of senators, who accompanied Saraki to the court room, is a pointer here.
Those senators who accompanied the senate president to court did, because they knew what had caused their president's predicament. Yes, they knew he may have had an omission knowingly or unknowingly in his assets declaration as a governor, but they also knew that the assets declaration issue did not begin this predicament. They knew that the foundation of his current  predicament was his ability to maneuver his party executives to become the senate president, and that the questionably rich among the party chieftains in concert with the presidency officials are behind his travail.
Mark it that if Saraki's problem has emanated without the tussle for position in the National Assembly, some of those senators would have left him with his burden. But this is a burden to be shared, because they all have been parties to the development leading to his travail. Based on newspaper reports and the character of the judge handling the case, as having been running from the Economic and Financial Crimes Commission, EFCC, in a case of bribery, and that money must have been  changing hands to get the senate president into the dock, and that money is still changing hands toward plans to get him impeached, those senators would be ready to stand by the senate president.
Saraki may have learnt one hard lesson about life here. It is that no one knows tomorrow. Few months ago, when he became the senate president, he hardly would have known that there would be a development capable of leading him into the dock as a senate president. He has fought to be senate president. Now, he also has to fight to overcome this challenge. It is what will make the Yoruba proverb, "it is in a tough case that you find a man." But as a human being, the direction the case will go may be beyond him.
NEWS AND FEATURES
News & Features Around The World