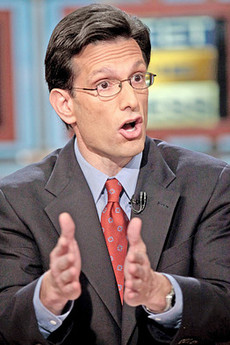 Eric Cantor(Courtesy:www.wsj.com)
Politicians celebrate when they win election and when they lose humbly bow out in places where real democracy is in practice. It is what is happening in the United States. Eric Cantor, current majority leader in the House of representatives and a member of the Republican party, on Tuesday lost in a primary election in Virginia to David Brat.
Brat contested the election as demanded by law and he won against the incumbent. Observers say Cantor's loss should not be seen as derailment or fall, unless Cantor has said so. Political office is not meant to be eternal, and political office holders know they are in office based on voters' decision.
Observers believe that tagging a loss in an election as a fall is what makes the 'human' in politicians to embark on 'do or die' effort to win or retain positions as incumbents, whether they serve as expected or not, while in office.
Cantor knows by his loss in the election to Brat, his party will strip him of the leadership position in the House as a necessary ritual that is not negotiable.
Cantor's political opponents may see his defeat and loss in the election as a fall as reported in news reports, but the truth remains that democracy is all about respecting voters' choice and it does not mean destitution for the loser.
Just few days ago, Hillary Clinton said during a book signing ceremony that herself and husband left the White poorer than they were when they came in. But newspaper reports have shown how the former first couple have been swimming in sources of good income; sending their daughter to the best universities, and with mansions in Washington and New York. It wasn't from the Clintons' income in the White House, but from goodwill established while in office in addition to good educational background.
It is what political power has given the Clintons. The same may be there for all former office holders to pluck apart from having their academic certificates and knowledge in their respective fields to continue their life long ambition to serve humanity.
The Republican Party will retain the same position of the majority leader of the House, with possibility of the party losing or winning the seat against a Democratic Party contender.
NEWS AND FEATURES
News & Features Around The World