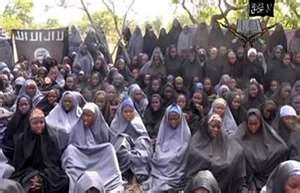 There is a speculation that some of the Chibok girls abducted by Boko-Haram may have been recovered from the sects' stronghold in the Sambisa forest, information from Nigeria indicates. According to trending news, on Wednesday, the Nigeria Armed Forces had announced recovery of 200 girls and 93 women from Sambisa forest after its sacking of Boko Haram from the forest.
But the information says it is uncertain if these girls and women are part of the 293 girls seized by a Boko-Haram from a school in Chibok.
Yet, it seems like the figures tally. About 293 girls were said to have been taken away by Boko-Haram. Almost the same figure of female have been recovered from the forest, where the sect has its hold and from it has been decimating innocent people.
Although, the Nigerian Army says it is still working to confirm whether the girls it has recovered are Chibok girls or not, logically those girls and women recovered may be part of Chibok girls, unless Boko-Haram has been seizing more girls than reported in the news.
The army should not find it difficult to determine whether the girls and women it has recovered are Chibok girls, since the girls themselves should be able to say their original abode prior to their seizure by the sect. And the parents of Chibok girls can be invited to partake in identifying the girls and women in a public parade, in case the girls have been hypnotized by their captors.
The kidnap of those girls by Boko Haram has raised so much hullabaloo, caused so much political damage to the outgoing government of Goodluck Jonathan, apart from the pain and the anguish it has visited on the parents and families of the victims. Their recovery is bound to attract celebrations around the world, free Jonathan government from hang over and make the girls parents happy again.
The world is waiting for the Nigerian Army to announce the result of its processing of the freed girls and women to determine, whether or not it is time to join Nigeria in celebration. This is apart from the army's effort at vanquishing Boko-Haram without international military assistance, meaning that if the Nigerian government has been spending enough money in acquisition of am munitions for its army as later done by the outgoing government, the army is capable of exploits.
Curious observers are wondering about what would have happened if the Nigerian government had not got arms to purchase elsewhsrer, after it was denied access to arms purchase by certain world powers. They say Boko Haram would have been intact and would have continued to decimate innocent Nigerians' lives.
Would the power that denied Nigeria access to arms purchase and also blocked the country from buying elsewhere, before the country got arms it used to vanquish Boko Haram, accept it had by its political miscalculation helped in sustenance of terrorism against Nigerian people?
Widget is loading comments...
NEWS AND FEATURES
News & Features Around The World