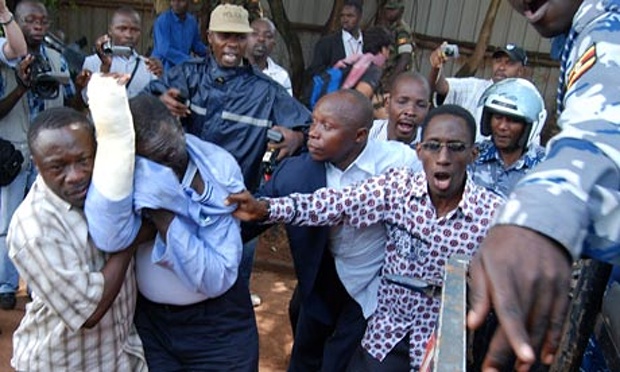 Uganda opposition leader in the hands of thugs called law enforcement officers
A study of Ethics in college as a distinct subject shows that there can be no undertaking of the subject without discussion of rules, regulations and compliance.
Compliance teaches the need to enforce rules and regulations, and that without it, rules and regulations will be flouted at will by all, and consequently will lead to developments, capable of blemishing the organization or the government's image.
Many corporations spend huge amount of money maintaining an entire department to ensure compliance of the ways they have chosen to do business to ensure obedience to rules and regulations.
The same is applicable to governments in several countries, spending millions of tax payers money for the people to elect their representatives, who are to make laws to be obeyed in agreement with the letters of the Constitution, and employing law enforcement officers to enforce the laws.
But there have been many instances around the world that questions whether politicians really understand the meaning of compliance. The result of  acts against enforcement of complinace to rules and regulations of engagement has led to developments with individuals flouting rules and regulations capable of leading to lawlessness.
The first case in this scenario is happens in Uganda, where the ruling party law enforcement agents descend on the opposition leader, Kizza Basigye, and flog him almost to death. These are thugs that the government has employed as law enforcement personnel, but who don't seem to know that the opposition leadership is provided for in the country's Constitution, and that by law the opposition leader is supposed to be protected from all forms of harassment, to avoid creating one party state situation, where no one can question the government.
The opposition leader as shown on the video posted on the Facebook was dragged out of his car, sprayed with tear-gas before he was mercilessly pummeled on the sidewalk by many guys with no one to help him out of the trouble for leading a a demonstration against the government over rising cost of food and fuel.. Of course, if the opposition party supporters should decide to help their leaders at that point in time, the whole situation will lead to chaos, the type that is very common in many of the African countries. The bad news is that Basigye has reportedly gone blind.
In Nigeria, a government that is said to be fighting corruption has itself been found to be enormously corrupt by the fact that it has loaded its first budget with very questionable fixtures that should not have been in the budget. Newspaper reports have called the attention of the public to the anomalies in the budget with no one in the anti-corruption government doing anything to show a need for the enforcement of compliance with rules and regulations. Is it lawful for a government to present a fictitious budget with a lot of monetary provisions targeted to enrich office holders and no one can be held responsible for the malady other than blame civil servants?
No one has asked whether the presidency that intends to spend money on a clinic in the president's office more than the amount allocated to all the teaching hospitals in the country not culpable. People have merely been asking that President Muhammed Buhari represent the budget, but no question about whether the president and his officials vetted the budget before they accepted it and move it to the National Assembly. No one has spoken about the need to fish out all the officials, civil or uncivil servants, who may have smuggled all the foreign materials into the budget.
It is simple that if what has happened in the case of the budget in Nigeria happens in a company that takes its image seriously and will follow compliance to protect its image, many officials will lose their jobs. But in a country with officials talking about a fight against corruption but with little or no knowledge about the role of ethics and compliance, opposition party members are the only people scrutinized for corruption, ruling party members will do anything and go untouched. If there is a sense of rules and regulations and compliance in Nigeria, the budget issue ia an acid test for the ruling party to begin the fight against corruption among its officials.
In New York City, news reports said that about 700 people got reprieve from paying fines for having flouted the quality of life laws. The city's speaker, Melissa Mark-Viverito, has been fighting to make the city abrogate the law, because according reports, the punishment for infringement ahs affected more black and the Latino people than the white people. Many have said that rather than abrogate the law, the city should build more places for people to urinate instead of people being forced by nature to urinate in the public. People say it is true that if the city wants to enforce the quality of life law, the city must provide the means for people to avoid infringing on the law and that without the provision of enabling factors to help people comply with the law, there would be no sense of enforcing compliance.
NEWS AND FEATURES
News & Features Around The World