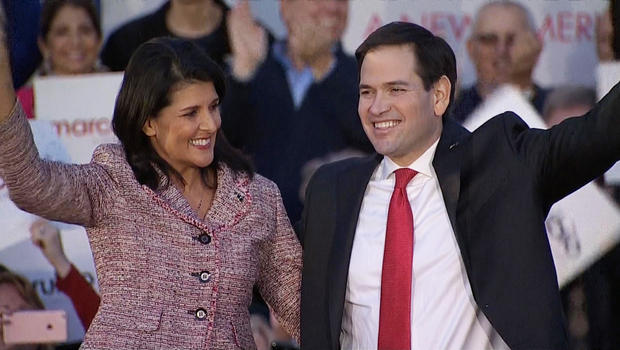 Nikki Haley and Marco Rubio
It is highly difficult to say whether the modern conservatives in the United States are truly conservatives who believe in the ten commandments and in the faith that the Christian religion is grounded.
​   Do they have faith like the one displayed in the scripture by Abraham, for which reason God declared him the father of the faithful and forbear of those who call themselves conservatives?
This is a question that has arisen out of the desperation that the Republican Party conservatives have been thrown as a result of the uncertainty in the party, over whom the conservatives want and don't want as the party's presidential candidate. These conservatives have been joined by a section of the news media owned by wealthy people who also call themselves conservatives.
These conservatives would rather do whatever in their power to ensure the person they don't want don't emerge as the Republican Party presidential candidate, than see a candidate emerge who cannot win the general election against the Democratic Party. They have tried all they could,  in conjunction with the liberal media, to stop Donald Trump's momentum, but all their efforts have failed to torpedo the guy.
In the middle of a confusion, the South Carolina Governor NIkki Haley, delivered an opposing speech to President Barack Obama's State of the Union address, which observers said was so watery and lacked substance, because it was targeted at undoing Trump's momentum and not at addressing issues in President Obama's speech.
Many people had also said that the speech by Haley may have been written for her, likely by the controllers in the Republican Party to deliver, and certainly not her own thoughts. Haley is in the news again as the party's presidential candidates in South Carolina gathers momentum, amid clear indication of Marco Rubio as the candidate who conservatives want against the leading candidates in the party's primary.
Haley said it that she wasn't going to endorse Trump, despite Trump's clear leadership in the party's primary elections and his lead in the South Carolina polls. And by the end of Thursday, news reports said that Haley had endorsed Rubio. And considering what the liberal and the conservative media are saying about the possibility of non-performers among the candidates dropping off from the race and allowing the conservatives' anointed candidate to enjoy their support against Trump, observers say it shows the lack of faith in modern conservatives at waiting to see how God can use any man, despite shortcomings, to achieve his plans.
Observers are stunned about how the conservatives think that Rubio is the candidate that will ensure them victory against either Hillary Clinton or Bernie Sanders of the Democratic Party at the general elections. Already, curious observers are saying that no assurance, whether or not non performers among the Republican presidential candidates withdraw or not,that Trump's current momentum will dim.
It means that the conservatives are still working to undo the uncertainty that has emerged against the party from the beginning​, still shrouded in uncertainty in their efforts to move forward, demonstrating lack of faith more than ever, unlike true practical conservatives of yore. People are asking how they are so sure of Rubio, who is already losing in the primaries and don't want Trump, because he fails to measure to their expectation in finesse. Why do they think that God cannot use Trump to teach a lesson in faithfulness to astound the wise?
Christians are commanded to love God with all their hearts, and the exhortation is said to mean that to love God with all of one's heart is to leave everything to God's decision without evil intention or conspiracy against others. But politics seem s to have taken that away from the modern conservatives.