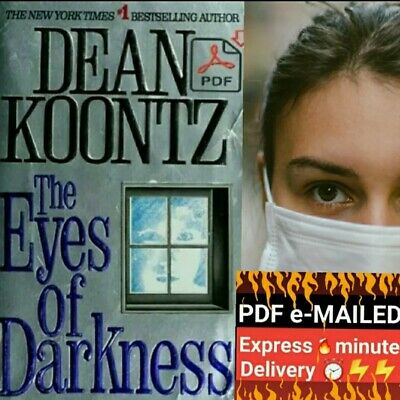 Dean Koonz's book "The Eyes of Darkness" as it appears on my Whats App page
Coronavirus seems like the untimely death that no one wants to have an interaction. Isn’t life sweet for all to want to remain here,  though some people do complain silently about the hardship of living on earth? Isn’t the current situation about Coronavirus and the seeming fear of death not a reminder of a song by Albert King that everyone wants to make heaven but no one wants to die?
I can hear some people saying that it is not a case that no one wants to die and that everyone wants to make heaven. But that it is a case that no one wants to be exposed to the danger of careless untimely death  and to avoid careless untimely death is the reason governments invest in modern health care delivery to stem untimely death.
However, Coronavirus has defied the template of ability to deliver modern health care delivery and inability to deliver modern health care delivery. The deadly virus is causing so much fear, consternation and panic in the developed world where it is afflicting and killing people, while Coronavirus impact is mild in the Third World countries. China, where majority of people believe Coronavirus emanated is a developed country.  Wuhan, a province in China is believed to be the origin. It was where it began afflicting and killing people before the virus began its journey to other developed countries. Italy has gone under under Coronavirus siege. South Korea is under Coronavirus siege. Other developed countries are in jitters in efforts  to stop the virus that has begun to show its presence without connection to Wuhan. The fear of the spread in developed countries is more than the fear of its spread in the Third World countries. Places of worship are not exempted from the fear of the unknown with Coronavirus. it has led to the death of human interaction and association as people avoid large gatherings and people are warned by authorities to do so.. There is disconnection between countries as some countries decide to  to stop travels and entries from affected countries  Leaving businesses and the world economy  in jitters. It is a pandemic that no one seems to have seen its type before.
Can Coronavirus be a case of an accident from the handling of a biological weapon? What about this book by Dean Koonz titled The Eyes of Darkness said to have been written in 1981 and the content of the book has reliably traced the origin of Coronavirus as an instrument of war to a laboratory in Wuhan, China. The statement that accompanied the picture of the book sent into my WhatsApp page reads: Who is aware of this story. (?) A book from 1981 which speaks of the Coronavirus as a bacteriological weapon and that around the year 2000 this disease will spread around the globe? In chapter 39 of the eyes of darkness, Koontz speaks of a Virus developed in military laboratories near Wuhan as a biological weapon.
And now there is a propaganda in the news that the United States Army may have planted Coronavirus in China and a section of the media in the country is working to dismiss the propaganda, while no one is talking about the content of Kooonz's book as if the book does not exist. Although, a section of the media here had said there could not be a connection between current Coronavirus and the one mentioned by Kooonz in his book, becvuase according to the analysis, Koonz's book is a work of fiction without scientific basis. However, it is becoming clearer that just as the Coronavirus is exactly what the title of Koonz's book is, the discussion over the origin of Coronavirus is becoming a face of darkness, and worse than an eye of darkness, which the world needs to investigate before some careless idiots will mistakenly or deliberately use a biological weapon to wipe everyone away from the face of the earth.
Apparently, the content of Koonz's book written in 1981 contradicts the current propaganda about the origin of Coronavirus that the U.S. is the planter. It is sickening to hear a section of China media talking about slowing of the virus in China after the death of over 3000 people in that country alone, and some idiots are praising the country for a good job for finding solution to the virus, when it is still unclear whether China may have been the owner of the virus as a biological weapon as written in Koonz's book. Does Dean Koonz exists and does the book exists? Why the silence over the book?
HTML Comment Box is loading comments...
NEWS AND FEATURES
News & Features Around The World