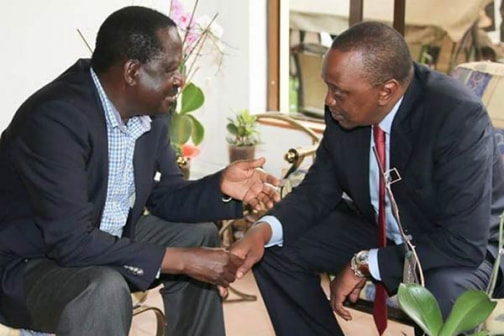 The opposition leader, Raila Odinga, and the incumbent President Uhuru Kenyatta
Kenya's opposition party, NASA, has been given access to examine the country's electoral body's computers, in a legal battle against President Uhuru Kenyatta's reelection.
The opposition's request to access the computers has been challenged by lawyers to Kenyatta, on the ground that the opposition has failed to list hacking of the computers, as part of the reason for its loss of the election.
In court arguments, Kenyatta's lawyers said that it would take more than a week to examine the computers and related documents. But the opposition said examining the computers could be done in three to five hours.
With the court's permission to the opposition against Kenyatta's lawyer's challenge to the request, observers say the opposition has moved a step toward a robust challenge to Kenyatta's reelection. They say the court's decision is the court's way of proving to all Kenyans about its readiness for transparency.
The Supreme Court is expected to give its ruling on the election on Friday. The ruling will be either to uphold Kenyatta's reelection or throw out the result for his reelection. If the court upholds the incumbent president's reelection, he will be sworn into office within one week of the court's decision. But if the court annuls his incumbent's reelection, another election will hold within 60 days of the court's annulment.
The opposition party's challenge of the presidential election results followed what it called widespread irregularities, against the  international community's observers comments that the election was free and fair. However, there was negative spontaneous reaction against the election results from the part of the country controlled by the opposition.
The opposition party had said it would not be challenging the election results in court, but changed its decision for what it called government's clamp down on human right organizations it had expected would go to court to challenge the election. Another problem the opposition has in its challenge is effort to avoid a repetition of the last political logjam in the country that claimed over 1000 lives and displaced about a large number of Kenyans.
Comment Box is loading comments...
NEWS AND FEATURES
News & Features Around The World