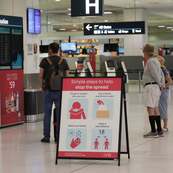 A notice at Sydney airport about simple ways to help stop Covid-19 spread (Courtesy: Guardian)
Covid-19 is the power for leaders to unleash their wish on the people virtually worldwide. It is an instrument by opposition politicians to unseat incumbents. Some of those leaders who have gained power criticizing incumbents are themselves facing the Dracula-like personification in the dreadful virus.
The song and music of Covid-19's resurgence are discordant. Leaders' reactions to the piece symbolize the presence of danger. They alert followers about the threat of the virus, returning to the heydays of the virus following its initial emergence. It is a badge of patriotism for leaders to work to save their people, and they expect followers to obey to dance to their tune.
Consequently, leaders have changed the conventions and become lifesavers more than before the virus. Democracy, government by the people for the people, has become government by leaders. People who fail to dance to leaders sometimes draconian tune are tagged unpatriotic. It is unpatriotic to travel when leaders have advised against traveling to curtail the spread of the virus. Regulations for travelers during Covid-19 are strident, and many international travelers arrive at the airport to return home for lack of completion of airlines' protocol for the virus.
Travelers traveling to some African countries face the odds of having a negative test result for the virus and paying for a test in their host country where they are not present. In addition, people are unaware and confused whether the test required to travel is 48 or 72 hours before travel or the same day test. Thus leaving the house to the airport with a confirmed ticket does not mean one is guaranteed traveling until one has been given the nod to check-in at the airport. And the airline officials exercise their newfound powers without restraint.
No passenger who has not paid N52,000 for the virus test in Nigeria or other affected countries can board. Completing the three paged forms online is itself a headache. There is a list of items travelers need to know to travel against three weeks ago. The United States suffers cancellation of thousands of flights due to the unavailability of workforce arising from the high number of quarantined staff. The reduction of quarantine days by the Center for Disease, CDC, was useless as travelers face unmitigated inconveniences. Above all this is that President Joseph Biden has said the federal government is not the solution to the ravaging Covid-19 but the states.
Dr. Anthony Fauci continuously says he is for science. Science is against humans listening to music and dancing in significant places like Times Square to avoid getting caught in the Covid-19's dragnet. He has advised against gathering for the music and the dance in the world's largest city and financial capital. The federal government in the United States has said the Omicron's spread caught it unaware, so the man for science.
Therefore, President Biden can no longer cancel the virus against his campaign promises. He has capitulated to the spread and abnegates the responsibility to the states! His political opponents and the media opposed to him have seized upon this, add to his list of unfulfilled promises.