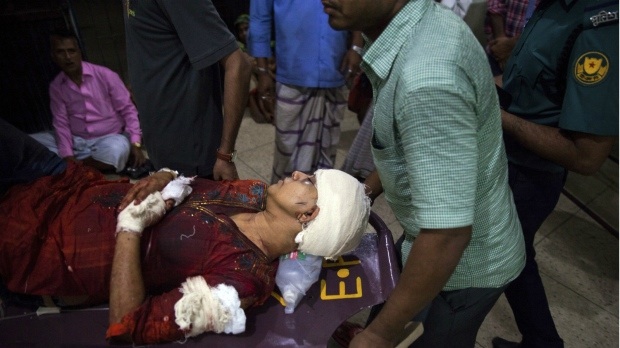 Rafida Ahmed, Roy's wife on the way to hospital. She may have learnt or later knows her husband 's death
Boris Nemstov, a Russian politician and a known Vladimir  Putin's critic is killed in Russia. Avijit Roy, a United States-Bangladesh blogger is killed in Bangladesh and his wife brutally attacked.
Major similarity between the politician and the blogger is that both are critics. And their murder arose from acts that people like approval than disapproval. Criticism to people is disapproval and takes away the shine from people who want to be seen as popular.
Yes, popularity is what politicians seek whether they are leaders or prospective leaders. They are like the character in Christopher Marolwe's "Dr. Faustus" and they enjoy the bloom and the worshipping of their celebrity status.
They go to any length to achieve fame and whoever goes against their wish is an enemy. Imagine the manner of the blogger was hacked to death and severing of his wife's finger and Nemstov getting shot four times in the back. Just last week, Luis Carlos Peralta Cuellar was killed in Colombia and his wife shot on the arm. Around the same time Cuellar was killed last week or so,  another radio journalist, Maurito Lim met with evil fate in the Philippines.
As usual, words of condemnation have been ringing out like an opened tap of water in the death of Nemstov and Roy, as if the critics of the deaths themselves don't have ways they booby trap the truth. Curious observers say that Putin's decision to take personal control of the investigation is the end to getting Nemstov's killers. There have been protests in Dhakar, Bangladesh against Roy's murder calls for justice against his murderers.
Incidentally, both Nemstov and Roy had spoken out in criticism of what they believed was wrong before they met with fatal fate.
Nemstov reportedly called for political reforms and honest elections in Russia. Reports said that Roy said that he received threats from Islamic hard liners last year following release of his book "The Virus of Faith", that the threat continued arriving in the email and that a famed extremist threatened him on his Facebook page.
Critics getting killed is not a new phenomenon. It is the latest recourse to silencing the truth. In the days of yore, imprisonment and detention were the ways of getting rid of nuisances criticism posed.
But rather than put the critic in the prison, feed him with bread and water of affliction, like it was done to Mi-ca'iah in the scripture and had been done to several others who resultantly became popular, the Faustuses in our midst would not want their dirty linen exposed and their critics gain fame at their expense. Wasn't Jesus Christ ridiculed and killed for saying the truth and that respecting the truth will make leaders free? Is it the first time the truth has been gagged? Hasn't it become frequent and a norm from country to country and depending on the temperament of leaders?
At the discovery of the printing machine in England, research shows the new machine pitch leaders against printers who print the truth against some other printers who ally with the leaders. Isn't it as it was yesterday it is today that there are critics who say the truth and pay the price and there are also critics who ally with the famous and benefit from compromising against the truth just like Judas Iscariot?