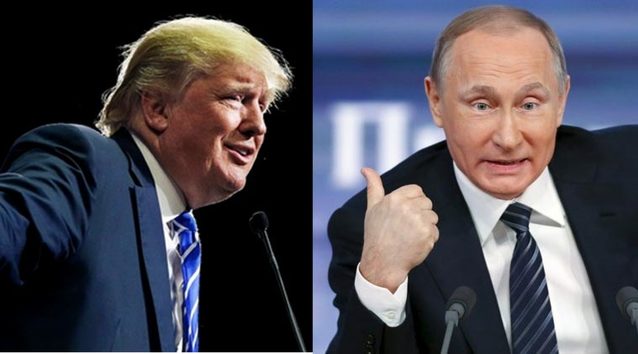 President Donald Trump and President Vladimir Putin
The world was caught by surprise on Thursday with the news of the United States' strike in Syria, response to chemical weapons attack on defenseless Syrians.
There have been reactions to the U.S. missiles attack on Shayrat Airfield all around the world, including Syria.
There seems to be justification for the strike, because it is seen by majority of people as an act in the defence of the defenseless Syrians.
While some criticisms of the act as a contrast to Trump's administration policy at home, among others, cannot be discountenanced.
The moment after the strike also represents a turning around for the President Donald Trump's administration. President Trump's decision shows that he is humane and that he is ready to defend the defenseless around the world, where ever and anytime they are threatened with chemical weapons.
But the greatest pivotal moment the administration's decision represents is the fact that it can take on Russia's interest so harshly, in spite of the rancorous political music at him that President Vladimir Putin may have helped him to win the election and that there may have been a conspiracy between the trump Campaign and Moscow.
The decision of the administration to take on Assad and Russia based on the feelings the President Trump advanced on the defenseless people killed in Syria would have been biting a finger that feeds one had really there been any help to Trump to win an election with an agreement between the two powerful individuals. The current stalemate between Russia and the U.S. over Syria has put that to bed.
Rex Tillerson was at his best in his choice of words against Russia's role in Syria, which he said had resulted in Assad's continued access to chemical weapons. Just as trump laid out the humanitarian reason for the Thursday's strike against Syria's inhuman infrastructure at Shayrat, Tillerson ldid not just accused Russia eveled Russia of culpability by association.
As usual, all the world has been hearing from Russian and the syrian governments is that it is not Assad that has ordered  chemical attack on his own people. Of course, Trump has taken care of that area with a statement that he is in charge of the country and must be held responsible for all the deadly acts there.
With the success of the decision to tell other leaders, who may have the mind of using chemical weapons, which they are delightfully acquiring, as if it has become food for their people, the Trump administration must also listen to some criticism at home that his campaign slogan - America First - must not be sacrificed on the altar of military intervention abroad.
Agreed that a campaign slogan or having to over an administration's major policies should not stop occasional incursion to helping the defenseless in acts to deter senseless leaders from killing their own people or allow their territory to be turned into killing ground, the Trump administration will need to be conscious of its policy goals and not abandon them.
The world has said that President Trump has done the right thing. His political opponents also agree with his decision on Syria. The world hears Trump's clarion call for the world to come together to stop the slaughter in Syria and other acts of terrorism against humanity. Russia must listen. It is the best Russia can do to help Assad, who needs to step down and allows help for Syrians to get out of the slaughter, to enable the country embark on rebuilding from the destruction that has been visited on it.