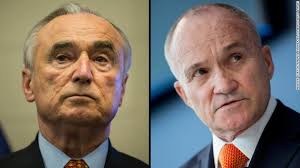 Bratton and Kelly
Do police cook numbers? This is a question that observers are asking following a fierce disagreement between Ray Kelly, New York City former police commissioner and his successor, Bill Bratton, over whether or not crime is increasing or decreasing in the city.
Kelly accused the police of cooking the numbers in the police statistics that showed that crime was way down in the city. But in his response, Bratton said that mathematics' has not changed and that the city is safer.
The battle of words between the two top police officers ranged for more than one week. New York's two major newspapers, the New York Daily News and the New York Post each published a front page story on the raging battle on the same day. Despite news reports that has confirmed the police numbers along with a slow down in crime, Kelly has been unrepentant for calling out his successor over his judgment that the police may have manipulated the numbers.
One of the news reports said that Kelly has a plan to run for mayor.Observers who read the news that Kelly may have a plan to run for the mayor's office have found the likely reason for his need for ear-ringing publicity. They said that if he thinks the police in the city has cooked the numbers, he ought to have a genuine number to challenge the police number. But many people say they do know that it is possible for police to cook numbers, if it is prodded by a desperate mayor who wants to look good and cling to office, when he should be leaving for failing to protect the people.
A good example is in Jersey City, where the police has statistics, where the sexual assault numbers in the police record differ from the one released by the office of the Public Safety Director, James Shea. Although, an officer in Shea's  office said that Shea may have used a number from  the office of the Hudson County Prosecutor, but there was no way of confirming that claim. And the response from the question to ordinary people interviewed about whether police cook books is more of surprises that the Public Safety Director abandoned the number in his own office in favor of another from whatever source.