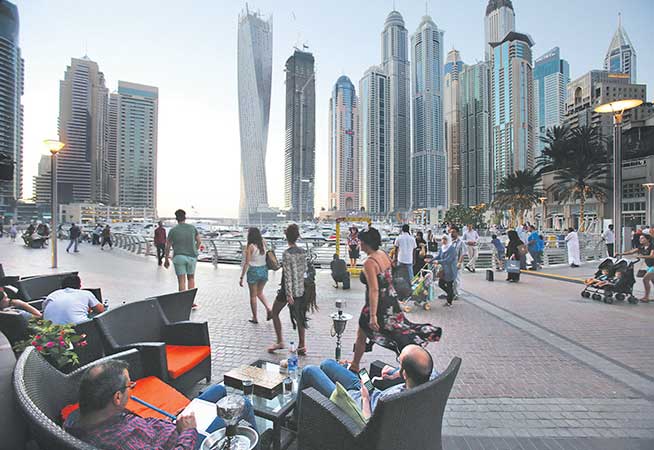 Dubai: (Courtesy:www.coloradodaily.com)
Visitors to Dubai in the United Arabs Emirate will attest to what money can do to advance the comfort of people, and the lack of money means a miserable lifestyle.          The entire United Arabs Emirate's population is a miniature of the population of many countries around the world. The lifestyle in the country represents the most liberal that one can find in the entire Arab land.
Yet, the U.A.E ensures control over its population. Though it is oil rich and money is not the problem for development, the country ensures control over immigration.
No one from any part of the world can travel to Dubai and settle down there as a permanent resident without going through the immigration procedure, just like it is done in other parts of the world.
Not like in the U.S., where some politicians talk about the need to have open borders, when they know the impracticability of an open border, especially in a situation when you share a border with a neighbor that is infested with crimes of imaginable proportion.
In Dubai, all permanent resident applicants are required to leave the city, during the process of their application for permanent residency. Where would they go or expected to go, during this period? Head to a place called Kashmir region.
This is true that you have-to go to Kashmir, a village near Pakistan, described as a neutral land and belonging to no country. KASHMIR is described as hot and almost lawless, though it has its own local government.
First, the weather in Kashmir is hot, unfriendly and harsh. The area is also under some sort of leaders capable of terror. And when you ask friends who are already residents in Dubai, why one must relocate to a place such as Kashmir because of an application for permanent residency while your resident application is under process, the answer you will get is that it is part of the rules and regulations of the immigration law in the land.
Every country has own rules and regulations and immigration laws. Part of these is the policing of the border area, to ensure that unwanted or illegal immigrants don’t stroll into the country unprocessed and undetected by the immigration department. Applications for residency need approval or rejection and documentation, based on rules and regulations. The doors are never open to all comers. Some visitors are allowed in and others turned back. Not all visitors are allowed. Everyone is vetted for security purposes.
These regulations are the non-physical walls that immigrants travel through to get to their destinations. It is in the worst of cases that authorities will resort to the building of a physical wall in border areas, when there have been lack of control and the country suddenly find itself swarming with almost unmanageable number of unprocessed immigrants.
No country in the world, except unoccupied lands, allow people to stroll in without going through the vetting. Of course, the unprocessed immigrant is not to be blamed for being an illegal and for going through without vetting. But the authorities that have failed to enforce its immigration laws. Laws are never made to be window dressing or for fashion, but to be enforced. The same is applicable to the immigration laws.
But when people who are empowered to enforce the laws fail in their duties and they begin to talk about having an open border and that everyone is welcome, because they want to win elections at all cost, there is a need to be wary and be alert to their cunning for political power. With time something will give way for their cunning and seeming good Samaritan posture.
Manifestly, the power to choose leaders in a democratic society belongs to the voters. It is the voters who will decide the type of leaders they want, whether leaders who preach to ensure open borders or leaders who will enforce immigration laws. An open border essentially means the collapsing of the parts of the immigration laws that seek the processing of people coming and going out of the country, and people who have chosen to come and live in the country as permanent residents.
While a border with a wall comes in different dimensions signifying enforcement of the immigration laws, and putting up a physical wall to deter a surge of desperate immigrants and unwanted rise in the number of unprocessed immigrants, it is still the choice of the voters to approve such a wall. Without tough immigration law, undocumented immigration becomes a door to another form of enslavement.
The choice is voters' responsibility. An immigrant will always have a choice to work and amass money enough for him or her to either remain in the country of his or her choice for a life of comfort without fears of the unknown or return to his or her country of birth. Certainly, no one  would want to live in a country without any form of control for the type of people allowed in.
Once upon a time, I met a Briton at Heathrow Airport in London, who confesses to me that the reason for his preference to live in Dubai, is the people's way of life and sincerity without puffing or showing to be what they are not..
Comment Form is loading comments...
NEWS AND FEATURES
News & Features Around The World