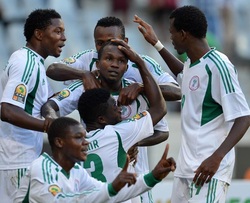 Eagles celebrate
The Nigerian Green Eagles on Saturday in Cape Town defeated Morocco's Atlas Lions 4-3 in the CHAN's soccer tournament.  The Eagles were down 3-0 at half-time, but resumed the second half and turned the table against the Moroccans with four goals in the net.
With their hard earned victory over the Moroccans, the Eagles who are mostly  home based players haved moved into the tournament's semi-final stage.  Observers say the home based Eagles are proving to be more formidable than earlier rated.
The team's coach, Stephen Keshi, had been skeptical of the possibility of the Eagles' winning the CHAN's trophy. But observers say the players are giving him reasons for a second thought, and that winning the trophy is not beyond them.
The stunning comeback to snatch the semi-final slot from Morocco and Eagles as array of talents to watch is already a talk of the town.