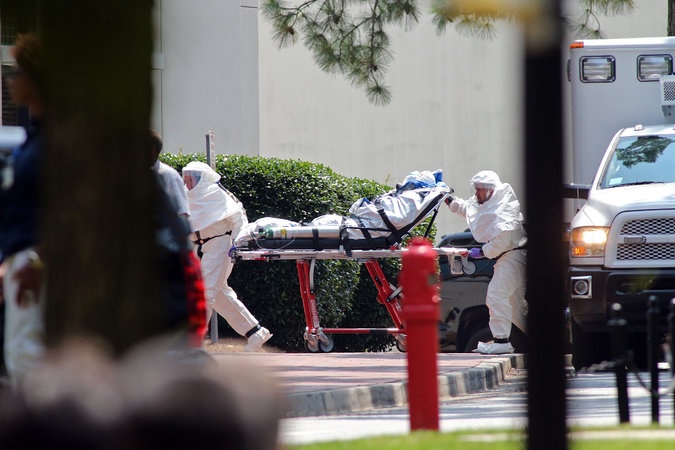 If Ebola has not re-emerge in West Africa after its devastation in DR Congo, Sudan, Gabon and Uganda, its curse and scuttling the respect the living accords the dead in burial rites would have remained a secret. Now, Ebola victims are dressed in overall hospital provided wears to forestall contact with others, and when they are dead they are likely buried in the same garment, because the body - alive or dead - is adjudged as capable of transmitting the virus to the living.
No relation will accept a dead body of an Ebola victim. It is not clear whether the hospital will even agree to release the body or family has no say how bodies are disposed off.
The latest news from Liberia that certain areas of the country has been shut out from the rest of the country to reduce possibility of travel by victims to other parts of the country. Amid this development, Liberian president, Sirleaf said that certain human rights would be scuttled.
What all these means is that Ebola victims are untouchable. They are being transported in special air ambulances. Some medical personnel are scared of having them in their hospital, and the whole thing looks like death is on the prowl.
Officials of the World Health Organization, WHO, are uncertain how to categorize the current outbreak that is manifestly spreading beyond West Africa, with one death in Saudi Arabia and another one in Nigeria - the matron who was one of those who had contact with a Liberian who died of Ebola in the country two weeks ago. Officials in Nigeria are discussing what to do to arrest the Augean Stable before it spills into their performance record. A Nigerian official has suggested that the country may ask America for help through the Z/Mapp, the medication being used to treat the Americans, who have the virus from contacts in West Africa and are said to be responding to treatment at Emory University in Atlanta, Georgia.
What kind of disease is Ebola? We understand it is name after a river in the DR Congo. How can it be contacted primarily part from its spread from those who already have it? What makes WHO thinks that it would not spread beyond the axis of DR Congo, Sudan and Gabon before its sudden emergence in West Africa? Why did the news about the virus not widespread before its emergence in West Africa? Is Ebola not worse than AIDS?
At least, AIDS victims have not been said to be contagious in death, unlike Ebola victims. They can be accorded a befitting burial and not thrown away like dogs, as Ebola victims are being treated.
Border closures has become an order of the day, making human interactions less attractive in the scheme, and almost spelling doom to communion. For example in Nigeria, government has urged people gathering in prayers to desist from such activities to forestall Ebola's spread. A commissioner of health in one of the states said he had written to a mega church in the country to ensure that a large gathering expected in the church from Monday does not become a room for Ebola's spread. But Nigerians have their own solution to Ebola in boiled water and salt, drinking and bathing with it as a way to stop Ebola.