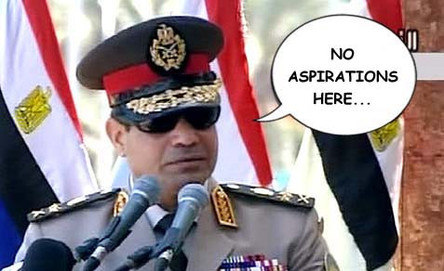 Field Marshal Fattah El-Sisi
Anytime from now, Egypt known as the land the land of the Pharaoh may henceforth be the land of Fattah El-Sisi, if it has not already.
A presidential election in which El-Sisi is programmed to emerge a winner is currently taking place  and photographs show how security is tight around the new lord of Egypt.
At the polling station where he casted a vote, four to five hefty men held hands in a chain around him.
News report says that his only opponent in the election is a hardly known man and El-Sisi is Egypt's wonder of the century.
He has told the world that members of the Muslim Brotherhood are destined for the grave under his administration. El-Sisi has turned Egypt into a land where reporters face death or life imprisonment for doing their work and mass of people sentence to death in sweeps.
He has Egypt in his pocket and says that relationship with the United States will improve after he assumes power.
NEWS AND FEATURES
News & Features Around The World