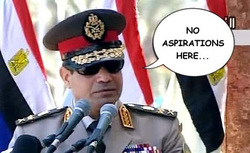 President El-Sisi
Is President Fattah El-Sisi of Egypt in control of affairs in the North African country or is he just a stooge of another power bloc without a decision or direction of his own? This question has become necessary in view of his confusing utterances and latest news about confirmation of death on 813 Egyptians, sentenced to death for demonstration against the sacking of Mohammed Morsi.
The day President El-Sisi was sworn into office, he made two statements. The first speech promised an inclusive Egypt, while the second continued the stance to deal with offenders. At the beginning, he told the world that he had no aspiration, and later he suddenly found aspiration.
Isn't it obvious that the first statement may have presented El-Sisi's wish and the second one imposed on him by the faceless power behind his enthronement? What would one man gain from killing thousands of people to become a leader and won't the world at the end of the day discover El-Sisi a stooge and merely acting a role?
NEWS AND FEATURES
News & Features Around The World