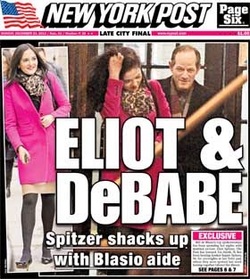 Ellitot Spitzer's new trouble is his foray into Liz smith's heart; the press making it seems like a sin to fall in love, with a question over Smith's acceptance of Spitzer.
People are saying the press has blown this, because of love's ability to find root in strange places. They cite Smith's freedom to live her life. People say that whatever becomes of her for accepting Spitzer is her own private business and should have no connection with performance of her duties.
Flores of Universal Security Services views the report as over reporting of Spitzer because he is a celebrity. And this he says is what gives celebrities a sense of importance that they don’t have more than other members of the public.
Flores believes that when a man and wife live apart and their marriage is known to be on a curve, the man or woman can go about in search of alternative partner to avoid loneliness. There are people who live under the same roof despite having marriage troubles that cannot be overcome and both find new partner while still under the same roof before packing out to begin a new life. He says Spitzer is not an exception.
Others interviewed by Global Pentorch shared Flores view. They said it was true Spitzer did what he was not supposed to have done as a married man and governor of New York State, when he had relationships with prostitutes. They said he had paid the price by losing his office and his marriage. Many consider that Spitzer has a right to live again, though may lack moral ground to occupy public office but not for falling in love. The cite his loss in the election for the office of the state's public advocate. They say no one should blame a woman who has fallen in love with him, because love finds room in strange places and that love is beyond moralizing.
Edwin Castro of Brooklyn says that love is not about the politics of the Liberal and Conservative pretenses. He feels that Spitzer should be congratulated for finding a beautiful woman like Smith and not that he has gone back to the prostitutes.
As if making a story of Spitzer’s being seen with a girl friend as relished, the news-hounds had reported that Spitzer was seen with Smith while he lived apart from his former wife. Even after  Spitzer and former wife came public and announced the dissolution of their marriage, the press continued scooping Spitzer and Smith all over during the Christmas holidays.