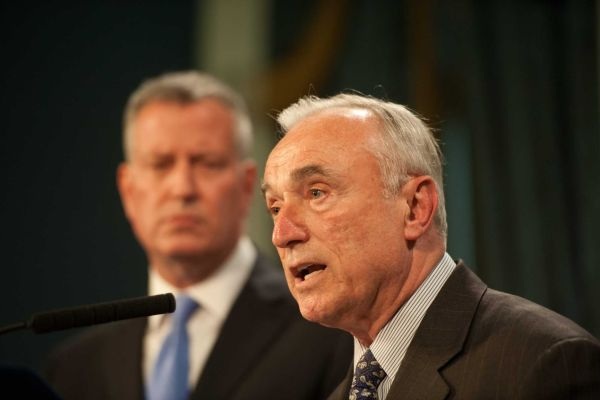 De Blasio and Bratton at the press conference
Eric Gardner's death in police hands in Staten Island, United States, last week has reopened the debate about the police and the use of force. In some other countries, the police is synonymous to an organization with the use of force and the word 'force' added to their name.
But in the United States, the police is called the police department like the New York Police Department, NYPD. But despite the difference between the names of the police in the United States and say countries in under developed countries like Nigeria, where there is a Nigeria Police Force, the use of force is still synonymous with policing work and whatever name police is called doesn't matter.
After members of the NYPD's fist-cuff with Gardner, the word 'chokehold' has become popular, and not even the police would want to be identified with it. The police commissioner, Bill Bratton, had no choice than to give short tutorial on different types of chokeholds, and the type the police entertains that doesn't pose danger to lives. Mayor Bill de Blasio, at the same press conference, said the picture seen in the video was troubling, but that may not be sufficient to make a judgment, until all evidences had been considered. But the mayor and the police commissioner's mood spoke volume, a reminder of their position on 'stop and frisk' that put them on the side of the people against bad policy.
The use of force by the police all over the world is one policy that observers say may be difficult to take away from the police. They are armed to the tooth to address situation when they are faced with mortal danger. But the irony is that there have been several occasions the police are not faced with mortal danger, but has resorted to the use of mortal force. In the US, where people are armed and the police have often fall victim, one knows a person will have to raise his arms in surrender for them to search the body, be sure there is no gun and effect an arrest. It is unlike situation in under developed countries, where the police are the only that kill and they are not killed. The question the public is asking in the case of Gardner and the police is whether the police needed to have Gardner on the ground before they could search his body and effect an arrest.
People are saying that the mere fact that Gardner raised up his arms amid a large number of police officers was sufficient enough to search him standing than bringing him to the floor, because it was apparent that in the bid to overpower him and bring him down, the chokehold - uncertain whether it is the type of chokehold entertained by the NYPD that doesn't endanger life - came into use. Now, one has to begin to seek specialists' to interview on chokeholds and their types. The question is: Is there really any chokehold that doesn't endanger life?
Comment Form is loading comments...
NEWS AND FEATURES
News & Features Around The World