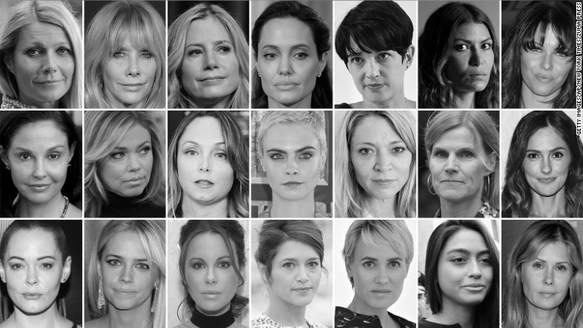 Some of the accusers (Courtesy:CNNMoney)
There is a song recorded in Nigeria by one of the most popular artists about love making, which if it has been produced in the United States, it may today fall under ban due to the sexual misconduct escalation that has taken over the USA's firmament.
In English interpretation, the song goes thus: "It is fire I have come to fetch, Akanbi. It is fire I have come to fetch Akanbi, you call me in and lock me indoor, take away my wrapper and push me on the bed and do that that a man does. If playing rough turns into pregnancy, the star owns the pregnancy."
Chief Commander Ebenezer Obey and his international brothers band, before turning into a full gospel band, recorded the song from the band's creative use of love and following trends in the society. The band leader and any of his members could not have meant to encourage rape or forcing a woman against her will.
But in today's USA, the music star may be accused of rape or encouraging rape or forcing a woman against her will. The public may also be asked to disown his other compositions as a punishment for his confession of rape or encouraging rape. In elementary Psychology, encouragement or reinforcement plays an important role in the formulation of what the public accepts as a norm and what is not.
In today's USA, no matter the time sexual misconduct may have taken place, it will enjoy attention in the public, if the accuser comes out and talk. No one gives consideration to the fact that it takes two to tango and that a single person cannot alone commit an offense involving two persons. In today's USA, sexual misconduct allegation can fly from nowhere into your domain if you a respected public figure or a politician targeting to go into public office.
One of the accusers of Harvey Weinstein said that Weinstein raped her the first time she invited Weinstein to her house. After the first act that she called rape, she again on her own allowed Weinstein to her house and the same act she said was repeated by Weinstein. The question that no one has asked is whether she did not reinforce or encourage the act by allowing Weinstein into her house for the second time.
She may possibly had thought that Weinstein was born again after the first act and allowing Weinstein into her house for the second time will make Weinstein a different person. But she said Weinstein repeated the same act, but she kept quiet about until there was a music in the air from other women accusing Weinstein of masturbation and other sexual misconduct. Perhaps, the woman who has thus accused Weinstein may have made a mistake in her account! It was possible Weinstein bundled her with force from the street into her house the second time.
Now, accusation of sexual misconduct allegedly committed forty years ago is in the air. Why? Because it is the season of the reinforcement and escalation of the sexual misconduct accusation and politicians' act of seeking pounds of flesh to stop a formidable opponent.
Now, anyne who has come forwadr with sexual misconduct allegation has all ears in the media. Possibly, if the media stops feeding the information of every allegation of sexual misconduct to the public the way it has been doing in recent time, the number of women coming forward with allegations will drop.
Comment Form is loading comments...
NEWS AND FEATURES
News & Features Around The World