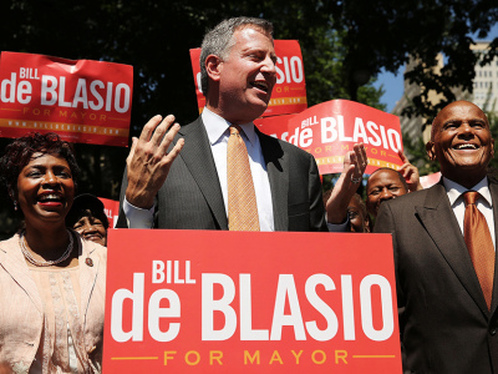 de Blasio and his wife (r)
New York City's Mayoral Race nears the finishing line, efforts to gain voters attention attract contenders',  with blizzard of advertisements in the bargain. It is like they are saying it is not a time to be mute. There have been upsets, and that seems to have encouraged the need to open up and talk.
Christy Quinn, the only female contender formerly led the pack in the polls, but she has dropped to the second position, while Bill de Blasio who was formerly in the fourth has sprung to the first position. Observers say that de Blasio's decision to use the family value has helped him.
Yes, de Blasio's wife and two children are campaigning for him. He is white and his wife is black. The mix says much more than words to voters. It shows him not only as loving and compassionate, but capable of disregarding the color of the skin in decision making.
The upset de Blasio has created by pushing Quinn to the second position in the polls has turned into a source of pulse to other struggling contenders, who are out with advertisements targeting a segment of the populace for support. The advertisements are strong to tell de Blasio not to rest in his oars yet. Bill Thompson advertisement says his parents are originally from the Caribbean!
Yes, the Caribbean population in New York is large. And observers are betting that if Thompson can convince and get their support, he will go far. But they say the major obstacle he may be having is that just the Caribbean population cannot put him on the mayor's seat. They say he would need to rack up support from other segments of the voting population.
The public is awed that a race that witnessed Quinn and Anthony Weiner slugging for the number one position has suddenly changed. Everyone knows why Weiner has dropped to the bottom in the polls. Though some observers who thinks he has a program to turn things around for struggling New Yorkers hope he will make a comeback. But from the look of the current picture, it will be a miracle for Weiner to climb the steep hill. Quinn is still popular. John Liu is not giving up. And the Republican Party candidates are there too. It is only Weiner who has a personally created baggage that is pushing backward rather than going forward.
The race now seems to be between Quinn and de Blasio's wife. People are saying Quinn's own husband should join her in the race, and that it is no time to pick complaints where thee is none. It is here that the cultural entanglement shows its fang. Quinn is said  to be gay. She is a husband and his wife has not been campaigning with her. The Daily News reports that her wife has appeared with just just once on the campaign trail. And following Mrs.de Blasio's trumpeting of the essence of family value between a woman who has children and one who has none, over the New York Times publication of a column that hinged on its imperative, the family value has become a major yardstick in the race.
Quinn is married like every other contender in the race. If she becomes mayor, she will break a record as the first female and gay mayor in the city. She is pursuing two record breaking and epoch-making efforts. Observers are quick to say that she will gain a whole lot of female support, but that it will serve her well if her wife comes out and campaign for her like de Blaso's wife has been doing. But when sexual orientation is considered, people say if it comes to the marriage issue, her strength may wane since it is not certain if enough numbers of New Yorkers are ready for an openly gay mayor. This seems to be giving de Blasio blasters of support. And there is Joe Lhota, one of he Republican Party candidate, who has challenged the entire Democratic Party candidates to a duel with his own record.