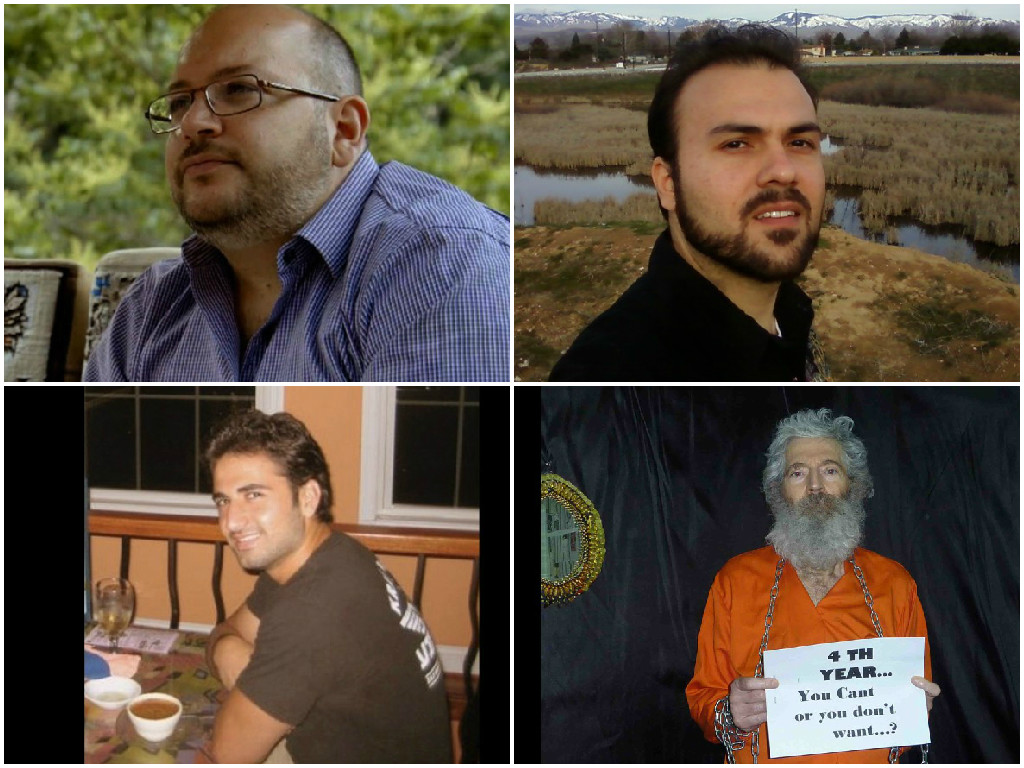 Photographs of four of the five Americans who have regained freedom.
Five Americans regained freedom from captivity in Iran on Saturday, following a prisoner swap between the United States and Iran, and that seven Iranians in the United States' prisons also benefited, news reports said. Four of the five Americans are Jason Rezaian, Amir Hekmati, Saeed Abedini and Nosratollah Khosravi-Roodsari.
The release, the report said, followed an executive order signed by President Barack Obama on Saturday, facilitating a release of $150 billion to Iran, as part of an agreement  earlier reached with other six nations, in connection with Iran's nuclear deal.
New reports said that the affected Americans were arrested in Iran at different times, accused of spying and were sentenced to various terms of imprisonment. But most analysts said that Iran's accusation against these Americans, among whom are reporters and pastors were trumped charges and false.
There were mixed feelings among various components of the public in the U.S over the political effect that the prisoners swap arising from the nuclear deal would have on the relationship between the two countries. And the positions taken are mostly dependent on political party affiliation. Democrats see nothing wrong in the deal, but Republicans see a diplomatic victory for Iran, despite the manifest gain from the release of the prisoners
Generally, many people hail the freedom for the Americans as the sweetest thing one would wish any human being. For family members, it is freedom home and at last. But with curiosity, one begins to gain insight as some truths begin to emerge about the intricacy of the diplomacy in the prisoners swap and the danger of allowing Iran so much latitude.
Analysts say that Iran is not a country to be trusted. They say that the money released to Iran will only further embolden the Ayatollahs toward achieving their political objective in the Middle against America, instead of using the money to improve the economic lives of the ordinary Iranians.
Some analysts describe Iran as a car dealer capable of selling any car to a buyer careless of the condition of the car. One recent event of the seizure of American sailors and their ship; the punishment and how the sailors were subjected along with apology tendered to Iran under duress before the quick release of the sailors, following the State's Department's intervention showed the smartness of the Iranians' act not to do anything capable of impeding Saturday's event leading to the prisoners' swap and the release of the money.
America benefitted by having five of its citizens released from the Iranians' captivity against seven Iranians released from the U.S jail and Iran has a whopping amount of money to be received at a time that the price of oil has nosedived to $30 and below.
Imagine what would have happened if Iran has held to the American sailors and allows the development to stand between it and its current gains in diplomacy.