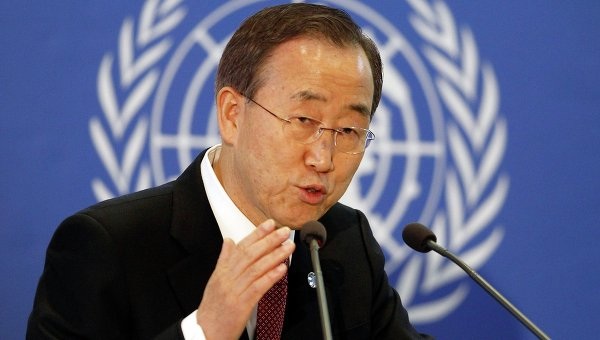 UN's Secretary General, Ban Ki-moon
Leaders of G20 countries are meeting in Brisbane, Austalia. Although the basis of their meeting is to discus the world economy, but the opening session has witnessed political brickbats and talks about some of the countries use of coercion and intimidation against less powerful countries. No less than the person of Vladimir Putin came under scotching criticism for his role in Ukraine.
David Cameron said that there may be more sanction needed to tell Russia its intervention in Ukraine was undesirable. The Canadian president, Harper, seized the opportunity of a handshake with Putin and told him to get out of Ukraine. Meanwhile, the Australian Prime Minister Tony Abbot reminded the leaders about the direction of the global economy wrapped in a speech wrapped hope and optimism.
United Nation's Secretary General, Ban K-moon was not left out as he reminded the leaders of Ebola, climate change and Ukraine conflict's  challenge to the world. Some people say Ban seems to have forgotten other ares of the world that are caught in wars that are also challenges to humanity as well as the world. Visibly, Ban's speech omitted Syria, Iraq and Nigeria where there are crisis that of the same mode with that of Ukraine and likely worse than Ukraine's crisis. No one doubts Ban's assertion that Ukraine crisis is a challenge to the world and humanity, but that the conflict in Syria, Iraq and Nigeria are equal in dimension to the conflict in Ukraine.
Observers say Ban misses the point by not knowing that the same war that is being fought in Ukraine is the same that is being fought in Syria and Nigeria. The war in Nigeria and Syria are worse than the war in Ukraine the world is faced with ignorant forces killing innocent people who knew nothing but are being treated as enemy combatants by terrorists. The civilized world are fully engrossed in the crisis in Syria, Iraq and Ukraine, but they have left Nigeria and Nigerians to the evil fate of contending with enemies that have identity. The only time the civilized world rose in unison in defense of Nigeria was when Chibok girls were abducted by Boko Haram, and it was merely talk shop and public relations shoot. No country has gone to join and help Nigeria militarily toward the elimination of Boko Haram, despite Boko Haram's near decimation of an entire population in the North East of Nigeria.
West African people are lucky that Ban has not forgotten them to handle their Ebola case without attention from the world.
NEWS AND FEATURES
News & Features Around The World