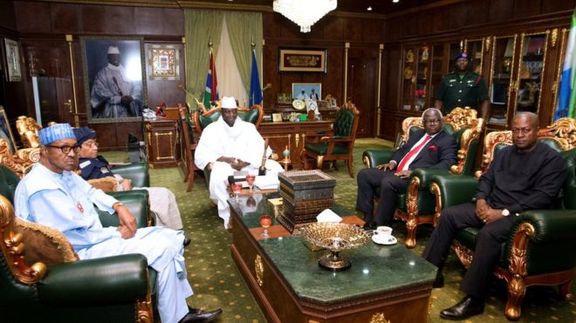 Leaders from West African countries in a meeting with Jammeh in his office during a failed diplomatic shuttle (Courtesy: BBC)
Diplomacy has failed in Gambia on efforts to resolve the election impasse in the country. And no one knows or is certain what next will happen.
A photograph appeared on the Facebook on Wednesday showing a mass of Gambians on the streets. The picture is not about people in jubilation or celebration, but people who are making their ways out of the country, to avoid possible catastrophe, which may follow the loggerheads, over the election impasse in the country.
Disarray. is the word that best describes the  current situation in Gambia. It is a story of sudden transformation from joy into despair and panic,. from election celebration, acceptance of defeat by the sitting leader and later withdrawal of his acceptance.
The joyous supporters of Adamu Barrow suddenly see their joy turns into gloom. A president elect who is supposed to be in the country for inauguration ceremony is now holed in Senegal, a fugitive for his own country, where he is supposed to be celebrating election victory and becoming the president for all Gambians.
Understandably, Yahya Jammeh, the country's embattled leader, whose support is crumbling, in and out of the country, like a pack of cards, has said that there are irregularities in the election after he has accepted defeat and has congratulated the winner. Now, he is ruling over a deserted country, with ministers resigning and he appointing new ones like a ritual that is necessary to appease gods.
The latest information that barrow, who reliably lost an eight year old son to a dog bite while in Senegal, exacerbating his already confusing political situation, is said to be waiting to be sworn into office in Senegal inside the country embassy in the neighboring country and next door neighbor.
Already, political observers are pointing out lessons to be learnt from the development in Gambia about an election loser accepting defeat and congratulating the winner, but suddenly turning around to reject what he accepted and declaring the election victory as illegitimate. They say that what is happening in Gambia is nothing short of a product of an incomprehensible and angry election loser refusing to accept defeat and putting his country in jeopardy.
Observers feel it is hard to accept certain legal practitioners's excuse that Gambia Supreme Court justices desertion of the country and refusal to hear the case filed by Jammeh over irregularities in the election, as the cause of the trouble in Gambia and the reason Jammeh has declared a state of emergency.