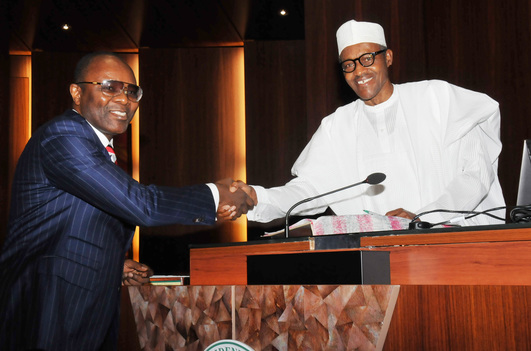 Ibe Kachikwu, Nigeria's minister of state in the petroleum ministry and President Buhari, the nation's minister of petroleum
In a note to this reporter at the weekend, someone said that if the reporter knows anyone at the seat of government in Abuja, he should call such a person and advise the government about how government personnel should be proactive in a time of scarcity.       He said that Nigeria and Nigerians currently lack fuel, money, no constant electricity but there is stability of government. "Nigeria is cool, but it is really a hard time, no fuel, no constant electricity and no money, but there is stability of government, thank God."
He had said in response to a question about the situation in Nigeria. The irony of his response is that he is one of many Nigerians who believe in the current administration in the country and has vowed at the inception of the government 10 months ago that Nigeria will soon be out of political and economic misdirection.
"Hahaha. No fuel. No constant electricity. No money. But constancy of these things are necessary to enjoy the stability of governance," was the reporter's response.
"Exactly," the man said.
It is not that the man has abandoned the ruling party and the government, but he is merely saying the truth as anyone who wears the shoes and knows where the shoes pinch will do. This reporter has hardly forgotten about his encounter and the truth about no electricity, no money and no fuel in Nigeria, when the truth again surfaced in a news report on Sunday morning in a criticism from Bola Tinubu, a notable ruling party  leader against Ibe Kachikwu, the minister of state in the petroleum ministry.
According to a newspaper report, Kachikwu had told the media that he was not a magician to order immediate restoration to the petroleum scarcity in the country. But Tinubu did not take kindly to the minister's statement as representing an affront against struggling Nigerians. Tinubu tried to limit his criticism in words to show that he is not against the president, who is the nation's petroleum minister, and on whose table the bulk stops. Senator Tinubu, wife to the APC leader had earlier criticized the government's program that it was not the change they voted for. In addition, Tinubu's daughter, the leader of the nation's market men and women had led a demonstration of traders against the government in Abuja.
As observers are currently saying, Nigeria is experiencing a hardship they have least expected based on the promise of the current ruling party of a new era in everything. But as soon as the government assumed office, it went after corrupt officers in the former ruling party in fulfillment of one of its promises to fight corruption. The government almost burnt its fingers for limiting the fight against corruption to officers in the former ruling party before criticism made it to begin to question others outside the former ruling party.
But the unexpected happened, when the prices of petroleum in the international market nosedived from hundred dollar plus to lower  price than fifty dollars per barrel. A columnist in one of the Nigerian newspapers at the time of the fall in oil price tagged President Muhammed Buhari as an unfortunate president with bad luck. But the ruling party did not see the signal as the time and the need to rally all Nigerians together to saving the country, irrespective of party affiliation or whether members of the ruling party are the angels and the officers of the former ruling party. are the corrupt people.
Rather than doing what was necessary, the government put out a budget that was more than any budget the country had when the oil price was high and continued to make the fight against corruption its major preoccupation to the detriment of other needs in the polity. The fight over office sharing is another issue that had led to arraigning of the senate president for offenses he reliably committed during years he was governor of his home state. The ruling party therefore has a fracture in its ranks over issue of who is corrupt among its own members and who is not, though people know that the senate president is being punished as a victim of disallowing Tinubu and Buhari their choice of senate president and not a fight against any corruption.
The government's regulation on foreign exchange that has left many students abroad unable to pay their school fees, is another issue apart from lack of food, lack of electricity and money at home, that is now making Nigerians to ask difficult questions. The president's recourse has been a message to students abroad to return home, if they cannot pay their fees, and that he has children schooling abroad because he can afford it.The issue of foreign exchange racketing by one of the president's spokesmen is also in the news today.
Although, the spokesman, Shehu Garba, denied in the news report that he is not a foreign exchange dealer and that he has not done any deal that has given him about N240 million, but he nonetheless said that he had only bought foreign exchange about $8000 for his daughter and his nephews. He has not explain whether he has got the foreign exchange that he has bought for his daughter and nephews through normal channel that every Nigerian is expected to get their foreign exchange or whether he has been helped to procure the foreign exchange through the Central Bank.
With oil price yet to climb as Kachikwu has expressed optimism earlier,, It is not a normal time for Nigeria like it is not for other oil producing countries that rely on oil windfall to meet their needs. Would the oil supply to Nigerians become normal in May as Kachikwu has promised and would the open fracture in the party mend? It is a wait and see game.
NEWS AND FEATURES
News & Features Around The World