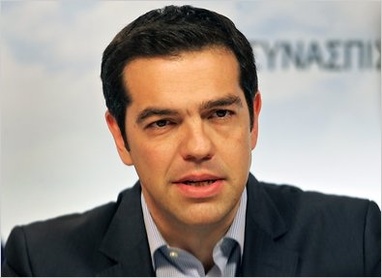 Alexist Tsipras
Alexist Tsipras has emerged the new prime minister in Greece. He defeats Antonis Samaras. Meaning that the Greeks want an end to austerity being Tsipras rallying call along restoration of dignity.
But analysts predict a tough work ahead of the new prime minister. They say there will be a lot of talks between Greece and its creditors, beginning with the Europeans Union, EU, and the International Monetary Fund, IMF.
One big question is how Greece will manage to end an austerity without defaulting in its obligations. There is a widespread of the country going bankrupt and forceful exit from the EU. But observers are watching to see how the new PM will manage the economy without the creditors.
However, analysts contend that Tsipras first responsibility is to Greece. While how he will fulfill his campaign promises occupy a large space, there is also a need to see how he goes about it without taking the country into a harder economic situation.
Meanwhile, Tsipras and his supporters are celebrating a hard own victory, while many Greeks who are equally happy expect to hear how their dream for a better life without austerity will be achieved.
NEWS AND FEATURES
News & Features Around The World