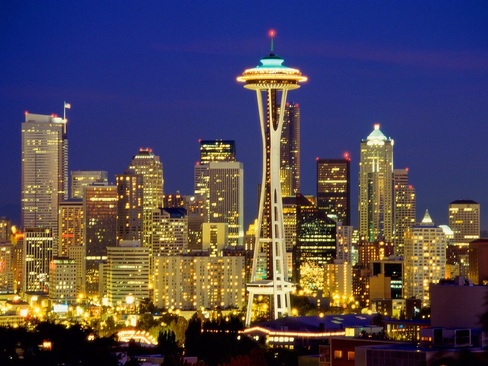 Seattle City (courtesy:www.familyofficesgroup.com)
It is Eureka for for Seattle residents in the United States, especially restaurant workers and others at the bottom of wage ladder, to benefit from $15 as minimum wage.
The city's council legislation of a $15 minimum wage is cheerful, though there is already a legal challenge to the development from those who think restaurants and other less fortunate employers are incapable of $15 minimum wage.
"I will go to Seattle," Ronald Sanchez, a New York resident said yesterday, during a discussion about the news from Seattle; the introduction of a living wage and that Seattle will be a place for people to live and work.
"$15 minimum wage is good," Diogenes Flores interjected. "Would that ever happen in New York City?" someone in the crowd asked. "May be New York will make $10 its minimum wage," another fellow suggested. Currently, $8 is New York City's minimum wage.
People believe that New York is the costliest city in the world, and it should lead in the amount paid as minimum wage, because of the high cost of living in the city. People are saying that if Seattle could do it, nothing must stop New York City from embracing it. They say it is about being humane for people to realize that $15 as minimum wage is ideal, because right now you still struggle for survival earning $15 an hour in New York, and people ask how workers earning less than $10.00 hour survive the cost of living in the city.
Restaurant workers earning minimum wage in New York City have been protesting demanding $15 minimum wage, but their protest hasn't been receiving required responses. Observers think it is a good development that restaurant workers' protest has yielded a response somewhere and that more may follow. The legal challenge, they say is expected and will be overcome. They say that employers of labor will raise opposition; politicians and governments will say it is anti-employment generation and that it will breed high unemployment.
It is why they say politicians and the government in Seattle should be applauded for having the idea that it is fitting for humans to have a living wage.