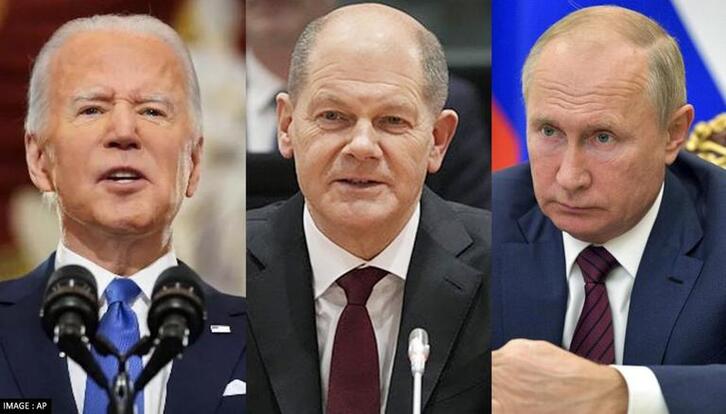 Joe Biden of United States, Olaf Scholz of Germany, and Vladimir Putin of Russia. Photo (Courtesy: Republic World)
Death is knocking on Ukrainian doors. News report based on United States' intelligence say about 50,000 would die if the Russians invade Ukraine and the country decides to defend its territorial integrity.
Russia has about 70 percent troops it requires for its operation in Ukraine in an exercise that has begun over three months. All efforts to persuade President Vladimir Putin to abandon his ambition in Ukraine have failed.
And the world is waiting for the time the noise of guns and artilleries would go off. Have Ukrainians begin to evacuate to save lives? Do they need to wait to hear and see fight to begin before evacuating?
​      These questions arise following  news reports aired Sunday evening about the upcoming Armageddon and evacuation of civilians amid rumblings of fire. Raising another question about why Putin may have allowed the room for negotiations and probably to allow defenseless civilians to leave the country before Russian forces would step into the country.
Ukrainian leaders know what Putin wants, and so are other world leaders whose countries have formed a common front negotiating with Russia. News reports have said Russia's demands is unacceptable to the common front behind Ukraine. And Russia is also reported as saying its planned invasion of Ukraine would happen since its demands are not met. Consequently, Ukrainian soldiers must begin training using the types of fighting equipment they have never used or trained to use before now. One soldier declared in one report that if God wishes they die but they would defend the country. Another one said they need to train to use the equipment because the country up against his country is more populated and has better war equipment.
People are asking whether Ukrainians have begun to evacuate amid these revelations about the strength of the Russian forces in comparison to the Ukrainian soldiers who are busy training with forces of invasion have surrounded their country. The discussion about evacuation is a reminder that a war foretold don't kill the lame and that Ukrainians should have started leaving the country long time ago when Russian forces began to arrive at their borders and not wait to hear the argument between Russian representatives and those of other world leaders over whether Russians would attack or not. But people ask where would Ukrainians escape to after their country have been surrounded by enemy forces? There is a possibility for Ukrainians to evacuate through Hungary, Moldovia and Romania to the South, and Poland and Slovakia to the west. The North and Southeast are areas where evacuation is impossible for the presence of Russian forces.
No one is against western leaders refusing Putin's requests and daring him to bring his forces into Ukraine in readiness for a combat in which 50,000 civilian souls might perish. These leaders should at the same time encourage ordinary Ukrainians begin to evacuate. The country's leaders are certain to have contingencies for their own protection and safety with civilians exposed to the danger of gunfire and bombs with little or no protection at all. It is why a war must be avoided if it is possible.
It the coming war in Ukraine cannot be stopped, then there ought to have been a plan for the evacuation of poor Ukrainians to save lives before Russian forces enter the country to maim and kill and be killed.
​
Comment Box is loading comments...
NEWS AND FEATURES
News & Features Around The World