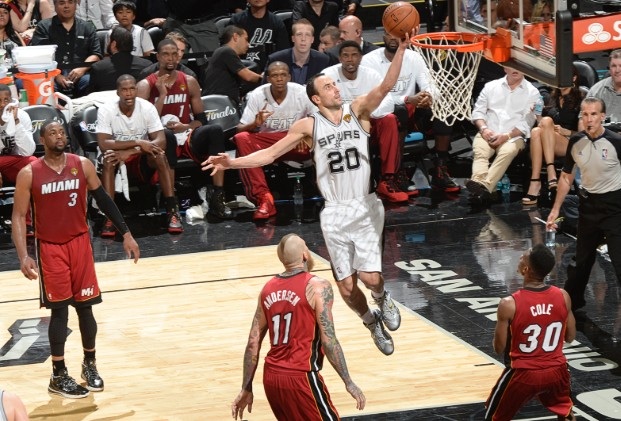 Spurs surge with Heat players watching (Courtesy: www.nba.com)
Miami Heat lost the first game in the NBA's basketball final to the San Antonio Spurs 110-95, Thursday night at AT&T Center, San Antonio, Texas.
The Spurs handed the Eastern Conference basketball winner a humiliating defeat with 15 points lead. The Heat is down in the finals 0-1 in favor of the Spurs.
The Spurs led from the first quarter with six points.
The Heat came into the second quarter with a struggle to cancel the Spurs lead; but merely won the quarter with a single point - making the score board reads 29-28, and leaving the Spurs with a leadership of 54-49.
Thus the scores at the end of the first half put the Spurs in the lead with five points ahead of the Heat.
The Heat could not undo the damage in the second half, but caved into further loss of vital points.
Some reports attribute Heat's later unusual poor performance to loss of air conditioning system in the game center, and that it was why Spurs handled the Heat without getting burnt in the process.
NEWS AND FEATURES
News & Features Around The World