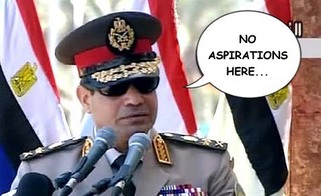 Yesterday, he was General Abdel-Fattah El-Sisi. Today, he is henceforth to be addressed as Field Marshall Abdel-Fattah El-Sisi. The new rank is courtesy a promotion by the highest Egypt's military council. The former General El-Sisi has also been cleared by the military to contest the presidential election as Field Marsall El-Sisi.
When General El-Sisi emerged after he successfully booted Muhammed Morsi out of office, he said he had no aspirations. But after mismanaging the crisis that has claimed well over a thousand innocent souls, he seems to have earned a qualification as often the case in African countries with a military tradition of subverting legitimate authority, to transform into a political head as president.
Meanwhile, Morsi is in jail facing trumped up charges with Egypt's future hanging precariously in the balance.
NEWS AND FEATURES
News & Features Around The World