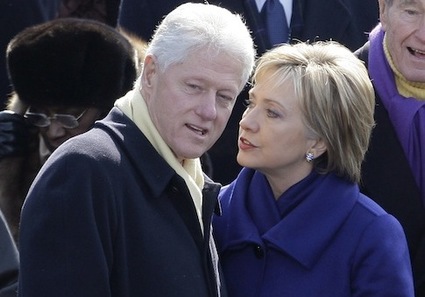 Bill and Hillary Clinton (Courtesy: Freebeacon.com)
When Julius Caesar was accused of having ambition by Brutus and other collaborators, he said that ambition was made of a sterner stuff, and he cited instances he said he could have achieved the position he was accused for being ambitious.
People say that one question difficult to answer is about what is really wrong in being ambitious? Are we not all ambitious, one way or another, to achieve our lives' goals? Are people who are not ambitious not also described as lacking prospects?
Perhaps, what Caesar tried to say was that he had the prospect to be what his accusers said he wanted but not necessarily from a burning ambition. A lot of people will argue that for Hillary Clinton today.
Yes, many people talk about Hillary and ambition. They ask about what she wants again having been in the White House with her husband, Bill Clinton for eight years. Some people ask whether she has forgotten something in the place that she wants to go and retrieve, giving the Clintons' unceremonious departure from the White House, for a reason that we all know.
Many people wish that the matter be put in the past and not to be debated again. But no matter how we try to forget the issue, the matter has continued to show its ugly head like a dangerous and unwanted snake hiding in a hole with only its head outside. And people believe that one thing is responsible for this and it is Hillary's decision to continue to serve her country and humanity after herself and husband's exit from the White House. And they ask whether there is anything particularly wrong in being a public servant?
Some observers like to say that the past in discussion is Hillary's husband's record and not Hillary's. Therefore, They say in talking about Hillary's record, the husband's record  shouldn't come in. Or say it the other way that Hillary's admirers like to talk about Bill's positive achievements on policy issues but not about his negative issues. This has raised a question whether it is possible to talk about Bill's record without talking about everything in his record or whether it is possible to give Hillary a free rein to use the positive side of her husband's record without expecting questions about the negative side. It is America's election cycle again and the talk about everything has begun, much against Hillary's surrogates on the television. Hillary touted her husband's achievement on policy issues and added that that will be part of her campaign notes, and also added the issue of sexism igniting a fire from her political opponents on an issue many of her admirers would want forgotten.
The argument Hillary's political opponents are massing against her claim as a  defender of women's rights is that if she is truly a defender of women's rights, she would not have pat Bill on the back for his act in the White House. They say that a defender of women's rights would not be selective about women to defend their rights. Some women think that Hillary saving her marriage is a great example of womanhood and a value desirable in all women, and that no one should use it to accuse her of wrongdoing in what was patently her husband's mistake. Accepting that her husband actually made a mistake has become another burden for the surrogates to manage with her Republican opponents saying no area is excluded or will be excluded..
Her Republican Party opponents, notably Donald Trump, have begun singing the song of Bill's wrongdoing in the White House. The following week after the show's beginning, an announcement came that Bill was joining Hillary to begin campaigning for her. Questions begin whether Hillary has confronted Bill about the trouble his past act in the White House is causing her campaign,  and has asked him to come out and defend himself to save her campaign or whatever he can do with discussion of policy issues to make a difference. Some people say it is the type of trouble that comes with ambition, which only people without ambition don't have.
They say it is a trend about the capability of the past to impact the present and the future. And the next question people have started to ask is about the possibility or the  impossibility about Americans voting for Hillary to return Bill back to the White House as the 'First Man', and that if Bill is returned to the White House as the First man, whether the last experience that took the couple out of the White House would not be repeated. People see this as a hard question that only Americans can answer with their votes.
But along the line, observers say that when the way democracy is played is considered, they say that one will see that anyone is capable of becoming a president here in the U.S, provided that an ambition is present, the money to prosecute the challenge is available and one can successfully say things that different voting blocs wants to hear and not alienate voting blocs with undesirable adherence to the truth.
NEWS AND FEATURES
News & Features Around The World