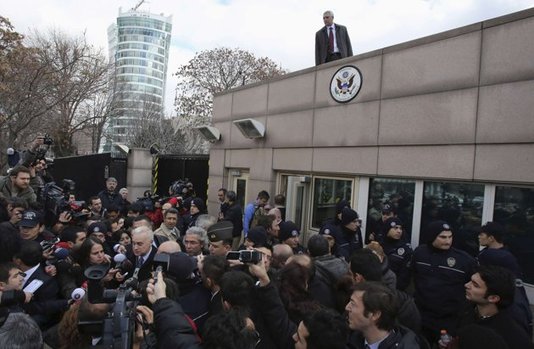 
Hillary Clinton has said the world is a safer place. The BBC has reported the United States
outgoing secretary of state's parting statement. Clinton has expressed what observers
say may have been her intention-making the world a safer place- but yet to be achieved
at the end of her term in office as US top diplomat.
Clinton’s statement has been described by observers as in contrast with state of insecurity in
the world, and wouldn’t want the US incoming Secretary of State, John Kerry to assume office
believing his predecessor’s statement as representation of true state of world’s security.
In the week Clinton made her statement, Israel reportedly attacked a location inside Syria,
where there was already a civil war. The Israelis didn’t immediately give reasons for the attack
many bservers said was capable exacerbating an already dangerous security situation in the
world.
But the US said the Israelis had hit trucks inside Syria conveying weapons to Lebanon. Syria
denied what it termed an allegation, with a clarification that Israelis attack within its territory
was on a military lab. Syria has since made a formal complain to the United Nations.
In its reaction, Iran said any attack against Syria was an attack against Iran. The matter has
hardly cooled, when a bomb explosion went off at an American embassy facility in Turkey,
killing the courier and a security guard. The CNN reported with a headline, ‘Clinton’s Farewell
Marred by Bombing.’ It was like the bombing in Turkey was inserted inside Clinton’s farewell
ceremony, as a message of insecurity in a dangerous world.
Observers say that the war in Syria happening soon after the deadly Libya’s experience
cannot be said to represent a scepter of a better world development. They say Libya’s
liberation has opened the world’s eyes to the danger of war between the West and the
Islamic Jihadists. They say the West had thought they fought and earned victory in Libya, but
discovered to their chagrin that the victory was indirectly for the terror networks that had their
own issue settled against Muammar Gaddafi.
The attack on the US Consulate in Libya and the killing of 4 Americans, including an
ambassador; the threat to an American ambassador’s life in Yemen, the trouble that ensues
in Mali-a spill from Libya and the Algerian hostage issue that has claimed so many lives, the
uncertainty in Nigeria where Islamists are at dagger drawn seeking to foist Sharia on the nation
and the danger to lives in Libya, North Korea’s threat to settle scores with the US and Iran’s
urge for nuclear power as deterrent to the West’s braggadocio (going by expressions of
Mahmoud Ahmedinejad) are pointers to the insecurity that has made the world more dangerous
than hitherto known.
Observers point out one of the reasons that French troops have been fighting in Mali is to
ensure the Jihadist militants don’t gain a foothold and use that area of Africa as a launching pad
for attacks against the West. They bet that a safer and better world can only be guaranteed when
the West and the Jihadist militants manage to settle their differences without going to war.
The West views the Jihadist miltants as terrorists that must be vanquished; the Jihadists
say the West is an abomination based on their own religion, they don’t want its civilizing
ethos, insists on Sharia and promise death for death in what has become its guerilla warfare
with the West.
Observers believe, and they say it everytime, it isn’t a safer world yet. Israel has just bombed
trucks suspected to be carrying weapons inimical to Israel's peace. Observers had said there
was possibility the weapons were being moved to avoid them from falling into the hands of
opposition or terrorists. The world is on a cliff.