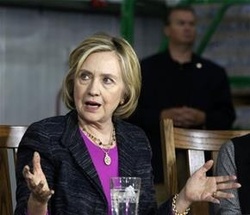 Hillary Clinton (Courtesy: newser.com)
Last time that Hillary ran for president, she did not have a baggage and was fearless of odds that could slide her in favor of an opponent. Yet, she went down in favor of Barack Obama, a new comer with little political pedigree that was not higher than community organizing and being a junior senator.
Consequent to Hillary's fall then, her supporters were shocked and hardly could understand why a former wife of one of the best presidents in America's history fell to a man with lesser political clout. President Obama offered Hillary an appointment and she accepted it. Her job as Secretary of State is now the cause of the odds against her second attempt at presidency.
News reports said that she released her emails said to have been sent through her private email against government policy. She ordered the emails released months after the issue became public that a highly placed government official of Secretary of State calibre disregarded  protocol and did things her own way.
Many observers are saying that it is not releasing the emails that matters, but that a Secretary of State who is expected to lead by example tramples upon laid down rules and regulations. The question is being asked that if a senior officer in Hillary's shoes at the time she served as Secretary of State found a junior officer circumscribing laid rules and regulations, what would have happened other the junior officer getting fired?
The say Clinton is still walking because equal right has been given a different definition other than the dictionary definition. They say rules and regulations or the law, whichever is applicable, are deemed to be made for some and not for some others. It is here that the private email saga will be more than a stumbling block for Hillary. See for yourself that her supporters hail the release of the emails, but her adversaries say releasing the emails months after the news of her use of private email broke is belated.
Some  people say if she has lost the presidency without any immorality as stumbling block, it will be a miracle to overcome an issue of immorality of trampling on rules and regulation she is expected to help enforce. But there are some others who think that these days anyone can become anything regardless of any immorality. They say Hillary and her husband, Bill, have got whole lots of money, and she can browbeat her ways like rich people do to have whatever they want in the society against general expectations
Moreover, people say Bill has earned a name that his wife is supposed to use to ride to achieving whatever she wants. And if she fails again because of her use of a private email and carelessness, it is her business.