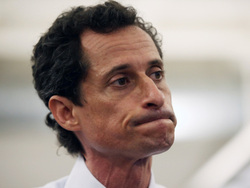 Anthony Weiner
Some New Yorkers think that Anthony Weiner has burnt his public trust as
a politician; some others think he is the next mayor in the waiting and others
just don't want to discuss his predicament and the mayoral race.
Just like Weiner himself has said, "Quit isn't the way we roll," there are
people who believe that Weiner may turn around to come back and that he
only needs to be given the chance to survive the current onslaught.
"It is his choice to remain in the race. It will be the public's turn to vote
for or reject him," Jimmy Lyons, a law enforcement officer said. He said that
the public will need to choose. He does not think the moral issue that has
been flagged against Weiner is the most serious issue confronting New Yorkers.
"I have not hear any of the candidates in the mayor race talking about the rent as an issue. Why do I have to pay
$2400.00 for a two bedroom apartment? Bloomberg makes case all the time on issues like the law on consumption
of soft drink and what people should eat or not eat. It is making big issue out of little things. The real big issue like the
rent no one wants to touch, but requires attention. Weiner's morality is his personal problem. It is between him, his
wife and God. I don't care who he texts and it doesn't bother me. What I care about is having is having a mayor who
will pay attention to people's needs."
Emmanuel Isesele, a New York based psychologist says that he believes Weiner will emerge the next mayor of
the city and it is the reason he wants him to remain in the race and not pull off his campaign as being demanded
by certain moralists. "I blame him for his behavior of going back to his vomit. But is there anyone who has no
skeleton in his cupboard? I love Weiner's program like affordable housing because they are people oriented." Isesele says Weiner is better than all others as a candidate without the scandal. He said it was why he led Speaker Quinn in the
polls before the onslaught. He says it is human to err and that we all sin and still go back to commit the same sin. He acknowledges Quinn as a strong contender and says her becoming the next mayor will be like having Michael Bloomberg for the fourth term. "Weiner will not protect special interests, unlike his closest rival - Speaker Quinn- who will be a new Bloomberg in office. Weiner is popular for his policies and the people know he will protect their interest."
"He is free to remain in the race if he wants. You don t have to vote for him if you don't want him. What he
did was an embarrassment  for him and his family. He has some good ideas before the mess that makes him to
matter in the race. What happened has created problems, but not for the ideas he has and his policies. The scandal
is for him personally. I am not voting for him because other candidates also have ideas and policies," Jason, who
refused to give his last name, said.
Jessica Webb says Weiner is a good man and that what he has done in his personal life should not be allowed to
come between him and his offer of service to the city and the people. "This is America and in the world. People have
sex. People do this thing. It is common to see people sending naked pictures whether age 16 or 50 doesn't
matter. It is not a new idea. What he does in his personal life has no effect about what he can do for the city and
the people." Webb thinks that regardless of anything Weiner has done, he is still a good man. She says it is quite
right for people to view him differently because of what has happened. She said the lady who released the
information about Weiner's latest texting that had caused him the nightmare may have her own reason for going
public. It could be because she was jealous for him being a married man and she wanted him. "Sometimes,
people do things that is pure spite."
The last few days must have been nerve wracking for Weiner, who is down in the polls from number one to the fourth
position. Yet, major newspapers in the city continue to publish front page news about the scandal that has unravel his position in the mayoral race and the whistleblower about to sign a deal for a porn-video about his interactions with Weiner.
The scandal is not going away soon and how Weiner will swim in the tide to emerge a mayor remains a miracle in the
making.