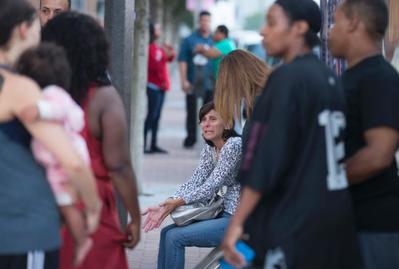 Perplexed residents after terror attack
The gun man in Orlando killed 49, according to the New York Times. The number of the dead came to 50, when the killer was added to the list. There are other 53 injured people, some of who may still be struggling for survival. And hours after the deadly drama inside the Pulse, authorities began counting the number of the dead and the injured.
First, the number of the dead was put at 20. This was later updated, and that the killer had committed an atrocity that had made the number of the dead to be the worst in the history of the United States shooting incidents, and the second most fatal terror attack after the September 11, 2001 attack, at the World Trade Center. Soon, it became clear that Omar Mateen, the killer, swore allegiance to the Islamic State before his horrendous shootings and few hours after his shootings, the Islamic State accepted responsibility for the terror attack on the U.S on Sunday morning.
President Barack Obama described the attack as outrageous and an attack on all Americans. At this time, there was no longer any need to want to know whether the attack was by self-proclaimed Islamic Jihadists or a hate crime, which it seemed at the first instance. The Jihadists had killed 49 innocent souls, who few hours before that incident never thought about dying. It was same as the world had witnessed in Paris, Brussels, San Bernardino  and Boston, sending innocent people to their untimely death. It is not the way anyone will want or chooses to die.
Anytime this happens, husbands, wives, children, nephews, nieces and cousins in several homes across the world are forced into unexpected mourning and some victims' relatives may never fully recover from the experience. It is why Obama's statement about whether it is the choice we have made about how to live our lives resonate, only that the president's statement concern the issue of gun violence and not the Islamic terrorism. Observers have been quick to say that just as the nation does not wish to live by continuous gun violence, the country cannot also choose to live by incessant terror attacks.
This is not just about gun violence or hate crime as some highly placed people are trying to make it up. This is a pure terror attack, though officials have reportedly said that there are no enough information yet to show that Mateen has external contacts with terror organizations. But information about attempts by the FBI to arrest him twice show that it is likely he has external influence and that efforts by officials saying that he has no external influence like the case of the San Bernardino killer is nothing short of trying to undermine the political influence of the killings at Pulse on the current political calculations and the presidential election campaign in the country.
President Obama went a little further to inject the political calculus with his statement, "No act of hate or terror will ever change who we are or the values that make us Americans." The question this statement raises is whether who we are or whether the value that makes us Americans is to continue to accommodate attacks and killings by self proclaimed Islamic Jihadists without adequately addressing the abnormal development in conjunction with leaders of countries, where this murderous influence emanates, about how to end the Augean Stable or for these countries to have consequences for  allowing the products of their deadly  ideology to contaminate us here?
Unfortunately, the terror killings at the Pulse in Orlando cannot be credit, but a dent on the president's record card, when it comes to debate on the defense of the homeland. The killings at the Pulse is bound to boost the president's adversaries and political opponents, no matter the effort to make it look like we prefer to embrace each other in love and inclusiveness, in the face of senseless and avoidable killings.Emerging information that Mateen had twice traveled to Saudi Arabia had removed the ground that the guy is merely a homegrown terrorist.