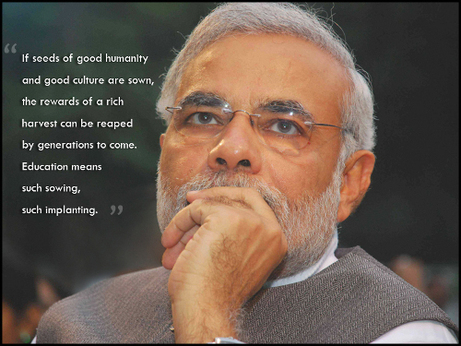 Narendra Modi (Courtesy:www.all4youth.com)
Indians have witnessed the fall of a dynasty,with the Indian National Congress humbled and defeated in the polls by the opposition, the Bharatiya Party led by Narendra Modi. "Brothers and sisters, you have faith in me and I have faith in you," he told his supporters, welcoming a new era in India.
The Ghandi's dynasty is led by Rahul Ghandi, while many people who support the dynasty want her sister instead. The division in the dynasty has paved the way for the emergence of Narendra Modi, whose party has  comfortably won  the country's presidential election.
By Thursday notable members of Indian National Congress Party, the Indian ruling party, who saw the signs of defeat in the figure of already counted votes called the election in favor of the opposition. They said on Thursday that Bharatiya Party was sure of winning enough seats for a government without coalition.
An the momentum continued for the opposition with division manifest in the ruling party over the issue of Rahul and his sister, the Bharatiya Party will usher in a profound change for India.
Modi, the man who has become India's president elect has been a leader in Guarajat for 13 years and known for his discipline. Observers believe he will fight corruption and restore hope for the country's economic rejuvenation. Reports say it is one of the reasons that the youths who know little about the Ghandi's dynasty and yearning for a change may have voted for him. It is a clear right about turn for INDIANS spearheaded by young people yearning for a change. The old people who know Indira Ghandi have become more and more eclipsed by the rising population of younger people and the conviction among young people who rarely know much about the dynasty for a break with the past, embrace the present and look to the future has been overwhelming.
Modi's party victory comes as a clear majority win with 275 seats in the Congress and needs no coalition to form a government. It is the first time such a clear mandate has happened in India in 30 years.
NEWS AND FEATURES
News & Features Around The World