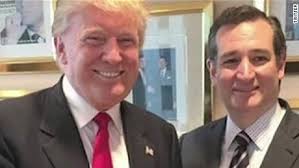 Trump and Cruz
Arrest and charge of Donald Trump's campaign manager and the National Enquirer's publication about Ted Cruz's alleged relationship outside marriage are two hot issues before the Wisconsin primaries.
All eyes are on the Wisconsin's election, because it is where the Republican Party's establishment has moved the goal post of stopping Trump's campaign momentum after it has failed to do that in Ohio and Florida.
The reported arrest of Trump's campaign manager, Corey Lewandowski, for simple battery against a news reporter in one of the campaign's rallies, and Cruz's battle to convince observers that Trump is his problem over the Enquirer's publication and not the Enquirer, are two issues pundits say are capable of affecting voters's decisions in Wisconsin later in the week.
Although, Trump's campaign spokesman reportedly said that the campaign manager is innocent of the charge against him and he would plead not guilty the court in May, though he is presumed innocent until proven guilty by the court, the development is still capable of affecting the public's view of Trump's campaign, judging from an already negative public view of the campaign about lack of decorum in managing protesters.
The same is applicable to Cruz's issue with the Enquirer. Many observers think that Cruz's problem over the Enquirer's publication is not Trump, but the Enquirer's editors. Cruz's explanation to the public that Trump is his nemesis concerning the story in the Enquirer is not enough to assuage the public that the Enquirer's story is far from the truth. Many people are assuming that anyone is capable of planting a story, but what the public wants to know is the truth or otherwise of the story, and that if the story is false, cruz should do what is deemed necessary.
Right now, Cruz is not innocent until he is able to prove that the National Enquirer's editors have accepted a false story from whoever may have planted the story for publication. Cruz's case is currently a moral issue and not legal yet, unlike Trump's campaign manager's charge. But for Cruz to show that the story of the existence of a mistress outside marriage against him is false, he is required to take a legal action, and not just telling the public that Trump is his nemesis and the story false. Some of the people mentioned about the story have already said that Cruz is a lawyer and that he knows the right thing to do.
Many observers are saying that Trump will need to engage his field workers for a refresher course in Public Relations in term of how to handle protesters at his rallies. They say that no one wins all the time and no one fails all the time either. Observers are convinced that Trump and his campaign's field workers cannot escape responsibility in the rough handling of protesters who are have been adjudged equally rough. But they say that since two wrongs are said to be far from being right, they say that Trump and his field workers ought to know that the protesters are spoilers, and that Trump and campaign workers who are working to gain the public's attention should have been more careful in demonstration of decorum and not show to be the same as the protesters.
If Trump had said, "Don't rough handle them, just take them out of the rally and sure be sure they don't get hurt," the public empathy would have been with the Trump campaign than the lack of it that the campaign currently faces. They say It is never too late to effect a change for positive results. They say Trump can change and his field workers too can, and that If they do, the result will be phenomenon for the campaign, because they say  observers know that most of those protesters are sponsored brats, but yet the public expects more from the campaign than just saying the protesters are infringing on any amendment.
The public is watching to see how these two developments: The charge against Trump's campaign manager and the Enquirer's story about Cruz's mistress will affect the Wisconsin primaries' results.
NEWS AND FEATURES
News & Features Around The World