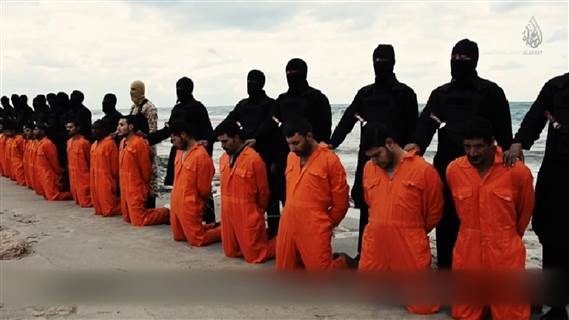 ISIS line up their victims before slashing their throats
The ISIS latest episode of killing 21 Egyptian Coptic Christians by slashing their throats in Libya has sent the world into shock. The Egyptian President Fattah el-Sisi decried ISIS kidnaping of the Egyptians and that the Egyptian authorities would not allow throats of Egyptian children slashed.
Egypt immediately despatched a fighter jet to locations in Libya. But it was either too late or the fighter jet did not hit the right target. The news said the Egyptians's throats had been slashed. Egypt has followed with additional assaults on ISIS in Libya and urged the world to join forces against murderers.
The seizing and killing of the Egyptians has become a major cause of debate. El-Sisi's call on the world to rise against ISIS is well received by observers. Some people say El-Sisi has shown a sense of urgency and repugnant against evil, but that it would have been more salutary if Egypt has saved her children from ISIS's claws.
Some people say the ISIS has started its own operation of hell-fire on earth. They are imagining humans being roasted alive; the pains of the victims before capitulation and the effect on human spectators. The hell on earth experience by ISIS is seen as contrary to equity, because those who should be victims of hell fire in after life are putting innocent people through what should be their own portion.
ISIS came into the news with slashing of kidnapped journalists' throats and had continued on that note, slashing human throats and roasting their victims alive and making their orgy for the bizarre a public show.
How to stop the ISIS has been engaging the international community but still with no breakthrough. The latest discussion centers on how to stop people migrating from the civilized world to join the gang of murderers whose enclave is believed to be extending beyond Syria.