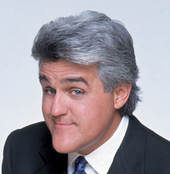 Leno
After 20 years of late-night show on the television in the United States, Jay Leno says he is finding it difficult to say bye.
According to him, he lost his father in the first year of the show; lost his mother in the second year and then his brother.
Now, to walk away from an audience he regards as a family is hard. But  a tribute performance featuring megawatt celebrities shows Leno has another family, who loves him like the audience he is leaving behind.
NEWS AND FEATURES
News & Features Around The World