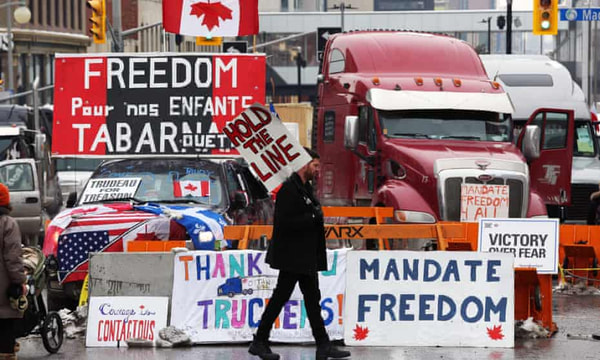 The truckers' protest against vaccine passports and mandates in Canada has brought a country known for relative peace into an explosive political experience. And Prime Minister Justin Trudeau's decision to shut down the protest without any consideration to talk about the issues raised by the protesters is shocking.
Events in Canada have rammed up the inconveniences that vaccine passports and mandates are causing travelers. The question on the lips of observers is, would not it have been better for Trudeau, Canada's democracy, and Canadians if the prime minister had engaged the truckers in discussions to resolve the impasse than using Gestapo tactics?
Trudeau was forced out of quarantine to attend to the issue. The danger that Covid-19, based on his personal experience, may have caused his hardline approach. He cited reasons he said the truckers needed to be forced out of the street but failed to mention why the truckers are protesting, using government power, a reminder of Fela Anikulapo Kuiti's rendition about government power in Nigeria.
Trudeau's first act emboldened the truckers rather than moved them out of their position. The prime minister then went on a more difficult path. He declared a state of emergency in Ottawa and targeted individuals who had donated and supported the truckers' cause. There is also a threat to damage the protesters financially by ticketing their trucks.
Observers say the truckers have committed illegal acts by blocking the road connecting Canada and the United States. However, the fact is that response from the government in Ottawa to the protest took about three weeks. If the government had responded timely, the issue of the protesters' blockade of the traffic and the Ambassador bridge would not have occurred. Therefore, the government is partly responsible.
Using the police to force the protesters out of their position is not ideal. The result will be different If the government has responded timely. The use of force and brutality is the symbol of government power. Many civilians view the police as the creation of government as an instrument of coercion. And the reason police are unpopular with the people. Perhaps one of the reasons Donald Trump refused to use the emergency power in 2020.
After all, the protests in Ottawa have not proved to be a threat - unlike in the U.S. The problem is that the government does not address the rally's cause in Ottawa. Imagine what it entails to travel internationally without proof of vaccination. The worst is the case of those who have tested positive to Covid-19 despite being vaccinated.
Another headache is the ever-changing rules about getting tested. Consequently, many travelers were stranded when the CDC in the U.S. suddenly changed the testing rules from 24-48 hours before travel to a day before a trip.
The stupid act resulted in the springing up of many testing centers doing the same-day testing that costs from $300 to $500. The lack of alternatives forces people to use these testing centers. The experience from vaccine passports and mandates jeopardizes people's plans and lifestyles.
Comment Box is loading comments...
NEWS AND FEATURES
News & Features Around The World