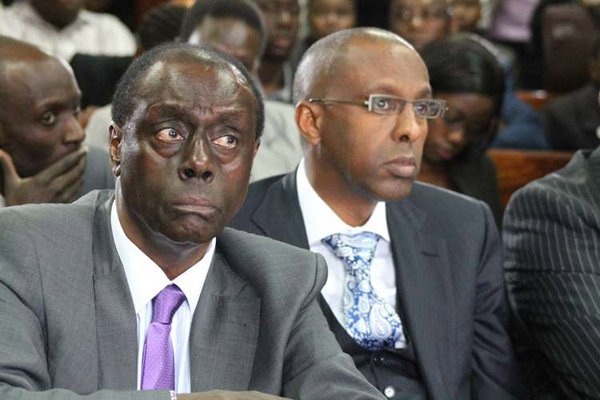 Faces of teachers at the court hearing (Courtesy: Kenya Daily Nation)
Kenyan teachers strike suspended for 90 days on the order of a court, in the interest of the children and the children's rights under the Constitution. The order was given on Friday specifically targeted to redeem children from public school.
The court did not declare the teachers strike illegal. The court said that the teachers will be free to continue their strike, if after 90 days there is no solution to the crisis between the teachers and the government, over court ordered pay rise for the teachers.
The government in Kenya, on Monday last week, ordered schools in Kenya closed, over the teachers strike following government's failure to effect a pay rise ordered in teachers' favor by a court of law.
Following government order for the schools' closure with the time for the children's return to school indefinite, private school owners kicked against government order by refusing to close their school, because they said they have contract with parents of children in their schools, they cannot break at will. The fall-out made the children from public schools, mostly from poor and struggling families, scapegoats for the government's decision in closing of schools and the tardiness in government's handling of the teachers' pay rise crisis.
The  government had said it had no money to effect the pay rise for teachers' which a court ordered in July 2015 and there was no dialogue of any type with the teachers to make them return to the classroom, other than that the government left the initiative to the teachers Service Commission described as the teachers' employer. and the TSC merely ordered the teachers to return to school or lose their job, saying the teachers' was illegal. The TUC went to an appeal court with an aim to stop the teachers victory at a lower court, but the appeal court instead upheld the lower court's decision, bolstering the teachers' resolve for a better pay.
When President Uhuru Kenyatta came into the picture, he said as a fact that the government has no money to meet the increase the court had ordered for the teachers pay. He said he was ready to pay the supreme price than make the teachers realize the dream for better wages, because in his won words, to accede to the teachers request will be encouraging other sectors to seek pay rise.
Last week, the government has ordered  its attorney general to go to court and to cite what the government describes as the unconstitutionality of the court order of a pay rise for teachers. The teachers have not responded to the latest court's order, but from the photograph taken in the court room and published by the Daily Nation, the court's decision does not appear to make the teachers happy. Although, the 90 days suspension of the strike has created an open window for the government to initiate a dialogue with the teachers, but it remains to be seen whether the teachers will accept anything short of court ordered pay rise, given the country's president insensitivity to the teachers' cause and the children's rights.
The opposition party, CORD, has said it will hold public rallies in support of the teachers' pay rise and that it will initiate impeachment proceeding against President Kenyatta for disobeying court rulings. The catholic Church in Kenya expressed willingness to create dialogue between the government and the teachers in the interest of the children, but asked that the two sides to first abandon hard approach position. But the public had criticized the Church for meddling and asked how the church thought it could resolve what a court had not been able to resolve for the government's lack of respect for the rule of law.