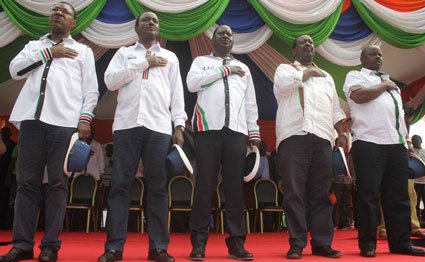 Rail Odinga and his campign team.
Kenya seems to in a different world, when it comes to the politicians and their use of uniforms for campaign. What has uniform got to do with politicians telling voters about their  plans for the country?
Currently, President Uhuru Kenyatta and Deputy president William Ruto have been wearing similar shirts and same color at a campaign rally.
The same is applicable to Raila Odinga and members of the opposition party, NASA, who all wear similar white shirt taped with blue,red and green color on the side, and the wrist. Each member of the campaign team also has a hat made of blue and white color.
Kenyatta and his deputy, and other members of his campaign team appear in a red shirt and black pant. Uhuru's shirt and that of his team seems to have black color behind and taped with white. 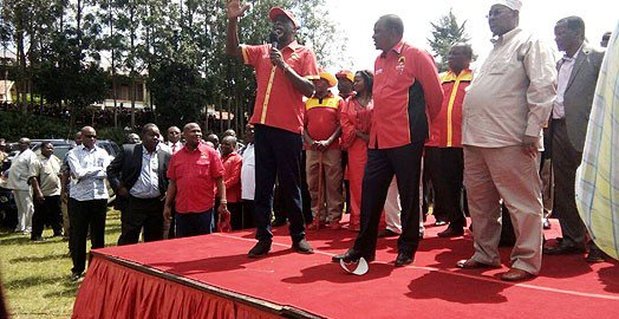 Uhuru Kenyatta and his campaign team team
What has same color and style by politicians contending for high offices got to do with message delivery? Is it to show that these politicians are not affluent and are not out to show voters their wardrobes, and to ensure concentration on message delivery?
But despite the similarity in the politicians' outfits and and whatever it may represent, politics in Kenya is known for it do and die culture, and like most african countries, lack of political agenda and fulfilment of campaign promises.
As Kenyatta's team and the opposition are out in their respective uniforms campaigning for votes, the nurses are out on the street, asking for better pay and improved condition of service. The doctors had their time out on the street, just like the teachers did ahead of them.
NEWS AND FEATURES
News & Features Around The World