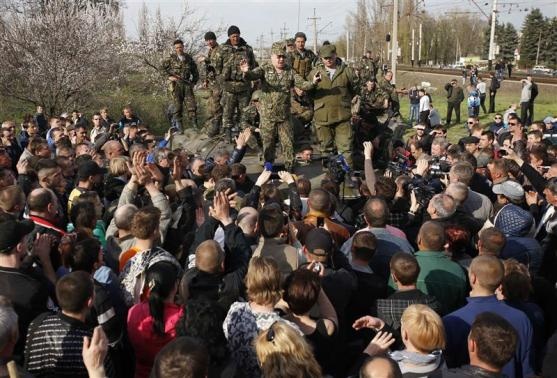 An alarm raised by Ukraine's acting president, Oleander Turchinov, that the country's forces in the east cannot stop the lawlessness there shows a picture of a powerless government. On one hand, the acting president says the country is combat alert and on another, he says the security structures are unable to swiftly take the situation in the Donetsk and Luhansk regions back under control.
What Ukraine needs to tell the world that its leaders have not..is that the country is impotent 'militarily to stop the lawlessness in some parts of the east, and if Russians forces massing at the border invade the country, Ukraine will be unable to stand up to them. The world had already witnessed that situation in Crimea.
More dangerous is Torchinov's tagging of the lawless people in the east as 'terrorists'. He knows the people are Russians and they are seeking to be with Russia than be with Ukraine. If the majority of people in Donetsk and Luhansk are Russians and they want to be with Russia as witnessed in Crimea, Torchinov calling them terrorists will only push them further in seeking to be away from Ukraine. Many observers think that it will serve Ukraine better if Torchinov can hold his breath and use to diplomacy to win back his country from the brink, rather than stoking the fire against his country.
Everyday, for the past two weeks Ukraine and the fear of Russia's invasion has been mostly  lead stories in the New York Times and the BBC. The world has read about America's readiness to mount more sanctions against Russia if Russia shows further sign of invading eastern part of the country. The world gas read how America targets businesses of people close to Vladimir Putin for sanction to send the message home that America will stand by Ukraine if invaded. People interviewed by the Global Pentorch on whether America will enter a war to defend Ukraine had described such expectation as impossible.
Now that the IMF has approved a loan that will also effect the release of all money's by other international donors to Ukraine, people say the country will have the finance to boost security and save the people from starvation. However, managing a country with Russians in majority in one part of the country requires readiness to accept what cannot be undone and manga what you have left. It happened to the former USSR. Sudan has gone into two and the events in Congo is another lesson. The West has said it would help ensure the money Yanukovych misappropriated are returned. But people are saying the it is not only Yanukovych who has Ukraine's money and that there are others who are still in Ukraine who have benefited from corruption in the country.
Click to set custom HTML
HTML Comment Box is loading comments...
NEWS AND FEATURES
News & Features Around The World