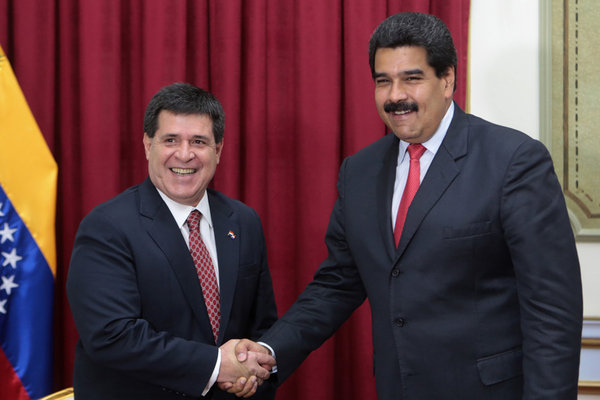 Presidents Cartes of Paraguay and Maduro of Venezuela
Political development around the world in the last five days have proved that leaders will do anything to ensure self protection against  people's wish.        In Venezuela, news reports show that President Nicholas Maduro has turned the Supreme Court to a rubber stamp, toward achieving his grandiose political plan to silent dissent.
There have been reports of bonfire in Asuncion in Paraguay against President Horatio Cartes' plan to change the Constitution, to favor him to run for another five year term.          The story of events in Myanmar, where a popular female opposition leader has reportedly put those in opposition in hard situation, is another prove of leaders' use of the power of coercion to safeguard self.
Pravin Gordhan, a revered finance minister, has lost to Jacob Zuma, a development Zuma has used to a grand political turf fight, based on reports about certain intelligence reports that says Gordhan has been scheming against Zuma, which means Zuma may have put Gordhan under watch, before his eventual removal.
This political staple seems to belong to countries, where political and economical situation are fragile, based on discussion with Flores Diogenes, who said that Venezuelans have turned the Dominican Republic to a second home, because the Venezuela's economy is going through a free fall, confirming all that we have been reading in the news about Venezuela's bad economy. Another commentator said that the venezuela's economy has deprived Americans who hitherto has enjoyed free oil from the South Americans country, at the behest of the Hugo Chavez, the country's late leader.
But a research shows that Paraguay's economy is not so bad. Though the country's currency exchange the dollar has been dipping in the last four years. What then can be responsible for the seemingly violent reaction to Cartes' decision to tamper with the constitution to allow him ten years in office, against five years that the Constitution currently permits him? The answer can be found in the Venezuela's situation and to avoid becoming like Venezuela, where Maduro has reportedly turned the Supreme Court to a rubber stamp, taking the law making work away from the parliament.
No wonder, the Paraguayans have gone straight for the jugular of senators, suspected to be cooperating with Cartes, in his grand plan to change the Constitution. And to further prove their anger against the parliament, they have set the parliament building ablaze, according to news reports by the BBC. 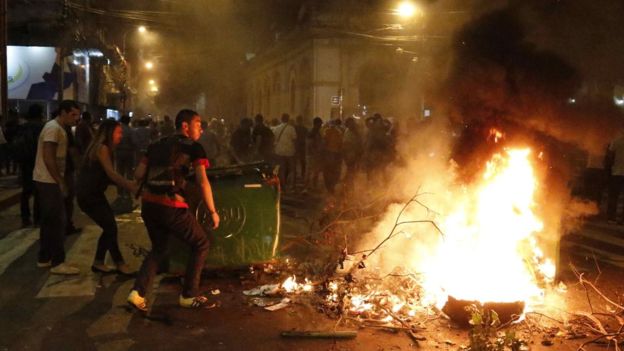 Bonfire on Asuncion in Paraguay (Courtesy:BBC)
One person has reportedly died in Asuncion, according to news reports.
The situation in South Africa has not become so dired enough for people to cause bonfire on the streets, but the situation there seems have turned int Xenophobia, where foreigners have become targets of attacks.
South Africans have told Zuma to step down. They say they have had enough of him. But he has said that his unpopularity stems from people who are against the political and economic change in the country.
He had a running battle against the office of the Public Defender over corruption charges. The fear of the ANC losing out in the political scenario has gripped the black people, but the ANC has not abandoned Zuma. In the latest development, the ANC has not said it is with Zuma and it has not said it is not with Zuma. But the youth wing of the ANC has called for a change in the management of the country's affairs to for the ANC to continue to enjoy its support. 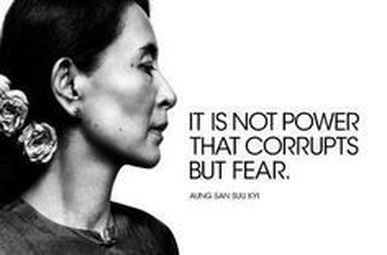 Aung San Sun Kyi of Myanmar, an international symbol of peaceful resistance, may be right when she said it is not power that corrupts, but fear.
But fear of what? The fear of losing power or the fear of losing the trappings of power and the grandiose ceremonies? Yes, possibly.
Without echoing San Sun Kyi's statement, many people say it everyday that leaders are selfish and that the moment they assume power, they think only about themselves and preservation of power at all cost. People say when the needs of the people have not been met, provisions are made to meet every need of the leaders, at the expense of the ordinary people.
If not, how would Maduro in Venezuela be turning the Supreme Court in his country to perform legislative role? How would Cartes in Paraguay be undertaking a change in Constitution toward ensuring that he rules for ten years, instead of five years?
And does the events in South Africa, in which Zuma in a game of self survival, removed the fiance minister, with a smokescreen of cabinet reshuffle and quickly sworn in a new cabinet, despite public disapproval and outcry?
In Oedipus the King by Sophocles, San Sun Kyi's statement is buttressed by Oedipus accusation of Creon, his wife's brother, whom he said was scheming against him for power, and Creon's explanation that he could gain no more power than he already had as a brother to the the King's wife, was unsatisfactory to the King.