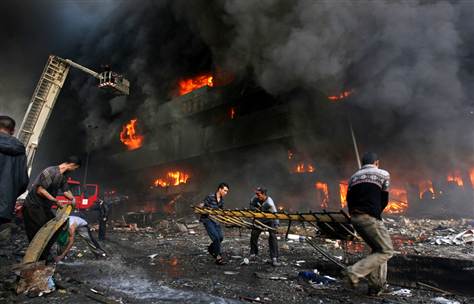 After a terror attack
Two terror suspects and accomplice were killed in Paris on Friday following deadly encounter, and attempt by suspects to prolong battle with taking of hostages. The scary picture of events has terror losing three and the society losing about 14 people.
What is obvious is that terror attacks always exact maximum damage, but the society in return always take down the known suspects - fewer in number than the number killed by terrorists.
Following the terror attack on the newspaper house in Paris, fears of like attack has grown in cities like London and New York, where already the systems of responses to terror are coded in different colors that determine levels of seriousness. You go to the mall, you go with fears of terror; you travel by air, you go with fear of terror and you ride in train, you have to watch out for unusual persons or bags.
Everywhere you go, a notice like "If you see something, say something", stares you in the face. Everywhere you go, there is fear of terror. Obviously, no one wants to die in a terror attack, but yet people are dying in terror attacks and all that governments have to say is engaging terrorists a continuous battle against terror.
Endless battle against terror. when there is a terror attack, Moslems will say Islam does not recognize terror, and that the religion does not encourage terror, just like they have started saying in France following the attack on the newspaper house. But Moslems in Britain has issued a contrary statement which says Moslems don't condone caricature of their prophet.
Some people are already asking when this battle against terror or the battle between the civilized society and terrorists will end. The civilized world has accused terrorists of first attacking it, and terrorists represented-  first by Al-Queda - has responded that the civilized society does not respect its culture. And people have asked whether killing the innocent people is an acceptable way to protest disparaging of a culture.
The first major war against terror in Iraq was said to have been wrong headed, with a discovery there had been no weapons of mass destruction in Iraq, against earlier campaigns that preceded the war. There had been offensive against Al-Queda, which resulted in killings of its leaders around the world.
Offensive abroad and defensive at home, but occasional attacks like witnessed in Boston in 2013 and in Paris few days ago breed  fears and expression of fears by people in public authority confirm the hell the world has become.
Amid this is effort by terrorists to seek new launching pads around the world and seek a source of revenue. Boko- Haram wants to create a country for itself from part of Northern Nigeria, and Al Shabab is contesting to own Somalia.
The Nigerian government and the people of Nigeria have been at the receiving end of Boko-Haram assaults for allowing continuous western education in the country and for frowning against Sharia as a form of legal jurisprudence. Kenya  has been under attack from Al-Shabab, because the country supports the extermination of Al-Shabab from Somalia.
NEWS AND FEATURES
News & Features Around The World