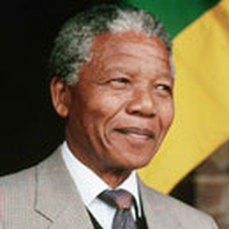 Nelson Mandela
Nelson Mandela, former president of the Republic of South Africa is gold. Do you know he is? South Africans call him “Madiba”, and he is known to the world as “Mandela”. A new title has been added to Nelson Mandela’s title. Apart from being the former president of South Africa, there are people who also see him as Africa’s former president. Can you believe that? It is true and you need to know. Yes, everyone knows that Mandela is gold. But not everyone has that hindsight to know that he is not just a former president of South Africa, but that of Africa as a whole. Now, South Africans should not be so possessive to think that Mandela belongs to them alone. The world says he personifies everything that is good about Africa.
Mandela stands tall, taller than any leader of his time and years out of office, he continues to commnad respect.
Come along and be part of a writer’s journey to the JFK International Airport in New York. He hails a cab and the Town Car black model screech to a stop in front of him. He opens the passenger’s door on his side, and steps and sits on the right corner.
The cab operator welcomes him after accepting to go to take him to the JFK for $30.00 from Brooklyn. The operator should be around 55 years in age. He is chummy, light complexioned and wears a faze cap. The only problem he has and the reason he says  he cannot take his passenger to JFK for $25.00 is the price of gas at $4.00, which he says it is the first time it is that high.
“Where is your wife coming from?” he asked. And the passenger responded, “Nigeria.”
“Are you from Nigeria, Africa?” the driver queried, and the passenger responded, “Yes.”
“Africa,” the driver continued. “Is it hot or cold in Nigeria?” he queried again. “It is always hot.”
“How is Mandela, your former president,”he queried. “Mandela is from South Africa,” the passenger sought to correct the driver. But the driver is done and he sticks to his new title for South Africa’s former
president.
“Mandela is good. Oh, he is good. But he is your former president. He is no more the president. He is good.” The passenger has no choice than agree with the driver. He also believes that Mandela is good, and it is for his goodness that the people all over the world still want him to live longer and not die now, despite his advanced age of 94. The driver spins into recent news about Mandela’s illness, and how people all over the world pray for his
recovery and for him to remain alive. He remembers President Jacobs Zuma of Soth Africa saying the people still want the country's "Madiba" to be around yet.
The passenger, an African-American and a Nigerian by birth begin to think about Mandela’s goodness; his golden name, how he earned the golden name through a period of struggle and hard suffering, and not because of a monumental wealth he has. In the passenger’s mind, he realizes the truthfulness of the taxi operator’s words that Mandela belongs to all Africans and he begins to think in his mind about Mandela, and our Mandela.
As he steps out of the cab and walks into the arrival hall at the JFK airport, he remembers a Van Wagner's phone booth on Bowery Street in Manhattan. The advertisement on the phone booth has Mandela's photograph and a question under it, "What can one person do?" The answer follows...Inspiration. Pass it on. He has studied the advertisement enough to remember the source as Value.com and its motto as 'The Foundation
of a Better Life.'