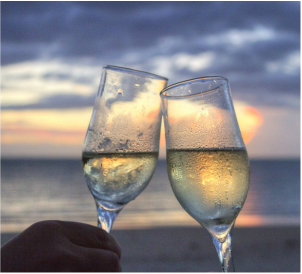 Marriage lovers are clicking glasses, because in the duel between marriage and divorce, one news report says that marriage has overtaken divorce.     Beaten divorce to pulp, and for the first time in recent times, marriage seems like an overcomer, like a person deemed as a failure, but who has suddenly begin to shine.
Marriage and divorce are two words that are opposite one another, like success and failure. People like to embrace success, but view fauilure with disdain. All of a sudden, divorce has an upper swing against marriage, with reports saying that more and more are divorcing, and that young people no longer want to commit to marraige, for the fear of divorce.
People, who know, say that marriage is sweet and that divorce equivalent to pain, which no one would want tocontemplate. But that nonetheless, they say that sittuations do arise that pits two people who have sworn for better for worse to throw in the towel and embrace the pain to kill the pain arising from the earlier sweetness.
But when ordianry mortals divorce, no one hears about it, unlike celebrity's divorce that newspapers announces to the public like the winning of an award with benefits. And in the civilized countries, lawyers have made divorce like a product they sell and and at a an affordable, without the appearnce of either spouse. There are billboards annoucing the great offers.
People have argued, almost unsuccessfully, that many more are living in successful marriages than divorces, and that divorce is only popular and in the news for its news worthiness sake like when dog bites a dog, because no good news is news.
Like a tragedy or disaster or abortion people don't want to be associated in earlier generations, divorce has forced itself on the new peoples' lives in the modern generation, and people are living with it, especially celebrities, in spite of its being harbinger of sorrow or an escape from a sudden and unmanageable sorrow from marriage, and quite rare in comparison to those who are happy in wedlock.
NEWS AND FEATURES
News & Features Around The World