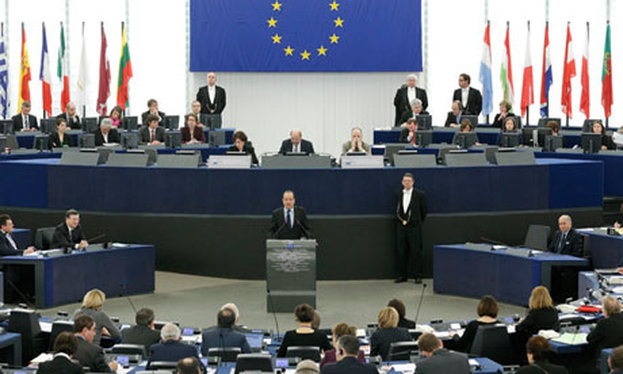 Francois Hollande addressing European parliament in Strasbourg (Courtesy:Christian Hartman/Reuters)
In one week, two major unepochal decisions were made by the French and British parliaments that sought to remove the lid of disapproval from gay marriage. France led and Britain followed. Members of the French parliament and the British House of Commons hailed their decisions as the best for humanity. Some described it as entrenchment of equality. It brought  sharp arguments between gay marriage apologists and opposition to gay marriage in both countries into the open, and the debate will rage for sometime before it will cool down.
"The decision would not only mean progress for the individuals, but for the whole society," the BBC reported President Francois Hollande of France. A reminder of civilizing journeys of European missionaies to Africa condemning Africans way of of life as abomnation; preaching one man, one wife. But today the same Europe is saying it is no longer one man,one wife that matters, but one man, one man, and one woman, one woman. And this is being done in the name of equality as smokescreen to turn what is traditionally seen as heresy into a way of life. The civilizing ethos Europe preached around the world colonizing other countries can no longer ensure progress.It is its opposite that has suddenly become an avenue to progress.
Many observers see the development between gay marriage apologists and their opponents as a culture war that will sharpen an already existing division between different parts of the world.
Europe dominates the BBC's chart of gay countries around the world. South Africa is the only gay country in Africa. People see the West's drive to plant democracy around the world as capable  of running into questions in several communities on the basis of the equality the West has begun to use to spur its approval of gay marriage. They say it is not only in old Igbo land in Nigeria that things have fallen apart in the words of Chinua Achebe. What is happening in Europe concerning marriage issues makes the West to be viewed as also falling apart, where dominant family morality has given way to the worship of what once seen as sodomy. Soon, they say incest and polygamy apologists will ask for equality. Why won't they? What makes gay society better than polygamy and incest?
HTML Comment Box is loading comments...
NEWS AND FEATURES
News & Features Around The World