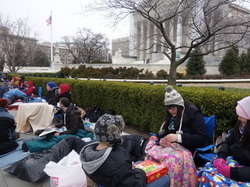 Proposition 8 gathers crowd
Gay marriage lovers and traditional marriage supporters await the Supreme Court's pronouncement over Proposition 8. What do you think about the continued tussle over gay marriage? Some societies are embracing what some see as more than tectonic change in the culture of marriage, while some societies will have nothing to do with it.
Now the definition of the word 'husband' is metamorphosing from being identified with a man to embrace the woman, and the same is applicable to the word 'wife' that  man can now have as a title.  Before now, the two words didn't  need to be defined to growing children. But with the new development, parents may have to seek ways to begin enlightening children about what has happened to the definition of the two words. Or is it a way to tell the kids freedom to choose either form of marriage or do what they like with their lives?
Already some parents-(can one say unfortunate here?)- have been reported as having had the experience of children coming to them in the dead of night to announce their embrace of the new sexual orientation. Someone asks that if the sexual orientation is normal why should parents be shocked, and why should children choose to inform their parents of what they are doing in the dead of night if they don't consider the act as abnormal?
One senior security executive who sought anonymity said he had no time talking about this issue and its attendant problem to humanity, because he said this matter would be forever. He meant the tussle over gay marriage. He said, now a woman can be a father and a man can be a mother. This could be beffudling to children as they grow up and unsettling for the society as currently being witnessed. It is why you see opposition against a practice that is fast becoming a norm." He asks why is there no opposition against the traditional marriage?
Some people are asking whether we now live in a world without norms. Christinanity, Islamic and even traditional religion frown against any sexual orientation they see as perversive. But the irony is that there are priests who claim to be gay in the society and they are allowed to continue on their job. Or are there not such priests in the Catholic church? Some people say such priests never had the gut to make their orientation public until they see that the gates of norms and ethos have broken, anyone do what they like and they too can come out and display their sodomy.
As a father, one guy says that if any of his children come to him and talk about embracing a value seen by society as anathema, he will go down on his kneels and beg for the child to save his household from shame and degradation. It is the only way he believes he can help the child and for the child too to help the family. He doesn't think allowing the child to remain and believe in a value that is unacceptable in the society is the best way to help. It does mean that a child can come to a father in the night and say he or she has become a robber and the father will keep mum and not do anything to disuade the child from being a robber. Anyone can try to be anything outside the main stream culture in the society, some people say, but shouldn't be forced on the society.
Some observers believe that the disagreement over gay marriage has brought about the issue of Proposition 8 currently before the Supreme Court in the United States; that the uncertainty over what may likely be the court's pronouncement  demonstrates that the society is far from ready for this cultural journey into a jungle of thousand demons and that those who have made it there need help for rehabilitation.
Some of the court's justices may be right that government has no business about what constitutes an acceptable marriage, but the natural truth about what culture has held to be what constitutes marriage may also be reason for speculation about the court's likely middle of the way course.