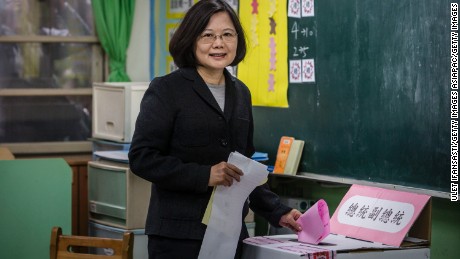 President Tsai-Ing-wen of Taiwan casts her vote during the election.
"Our democratic system, national identity and international space must be respected. Any forms of suppression will affect the stability of cross-strait relations." These are some of the words of Tsai-Ing-wen, the newly elected president of Taiwan, shortly after her victory at the polls.
Taiwan and China are next door neighbors, but reports confirm that though people in both countries speak the same language, but the difference between them over China playing an unofficial master's role and Taiwan seeking to be dignified as an independent country, has been posing a problem for a long time in their relationship.
Therefore, going by news report, Tsai-Ing-wen of the Democratic Progressive Party, DPP, may not just have broken the glass ceiling in her country by defeating the incumbent, Eric Chu of the nationalist Kuomintang Party, KMT, and China's strong ally, but that her emergence as president from the position of an opposition leader represents a rejection of near servant relationship by the Taiwan to China, toward charting a new course for the Taiwanese people, notwithstanding that the KMT has ruled Taiwan since 1949.
Don't you wonder how in modern day one country still play a masterly role over another? There was an incident on a South Korean television, following Tsai-Ing-wen's victory, which scored a point here and one that confirmed what the report said that China has been playing the lordship role over Taiwan and considers Taiwan to as a province..
According to reports, the 16 years old Taiwanese pop star raised the Taiwanese flag, while she played on the South Korean television but that she quickly apologized, in order to avoid making the Chinese people angry and not to stop buying her records. She was reported to have been prevailed upon by her sponsors to apologize for waving her country's flag.
Another report said that China had once touted that China could decide to wag the big stick against Taiwan by recolonising the country, if the Taiwan government misbehaves. Unbelievable that this could happen in the 21at Century. But certain from the words of Tsai-Ing-wen, a Deborah may heave emerged for the struggle of the Taiwanese people for total independence and not just anything that looks like it.
The voices of the Taiwanese people read from news reports show that Taiwan is a transformed country from a feudal state to an independent country. These voices show that Taiwanese people love their democracy and independence. Though, some of them don't believe that Tsai-Ing-wen will break china's strong arm rom Taiwan as some would expect, but they do believe she will be smarter in dealing with China than her predecessor.
Further going by her choice of words like 'national identity and international space' and demanding that they be respected, directed at China immediately after her victory shows that this woman may be the Taiwan's Deborah and may be the one who will break the strong arms of China over Taiwan, the same way that that the Israel's Deborah broke the strong arms of the Philistines over Israel.
Observers think that Tsai may not pursue a path that will annoy the mainland China, but she would undoubtedly seek a better economic power for Taiwan. Her education doesn't suggest that she will encourage Taiwan to continue as China's unofficial puppet.. A product of Cornell University in the United States where she earned a law degree, and PhD from the London School of Economics. Her emergence as president is a direct demand by the Taiwanese people for a drastic change from being a puppet for a journey to a totally independent nation..
1949 to  2016 - an odd 67 years of independence without independence, but something that looks like it may one day be over for the Taiwanese people. By her simple statement, Tsai-Ing-wen has set an agenda that her country's national identity and international space be respected.
NEWS AND FEATURES
News & Features Around The World